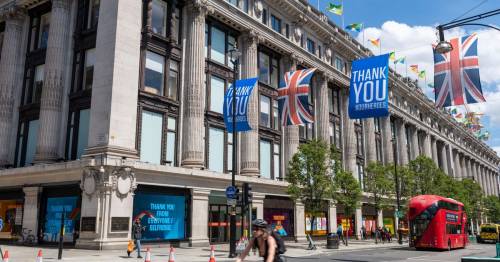 Luxury department store chain Selfridges is up for sale for £4billion, according to reports.

The owners of Selfridges are currently considering the offer, React News said.

Selfridges, known for its iconic window displays and upmarket brands, was founded in 1908. It opened its flagship store on London's Oxford Street in 1909, and this is still the second-largest shop in the UK after Harrods.

It also has one branch in Birmingham, at the Bullring, and two in Manchester, in the Trafford Centre and Exchange Square.

Selfridges is currently owned by the Canadian Weston family. It is part of their overall retail empire, which is worth £11 billion.

Selfridges is currently owned by the Canadian Weston family. It is part of their overall retail empire, which is worth £11 billion
(

The Weston family are currently tenth on the Sunday Times Rich List after falling two places from 2020.

A spokesperson for Selfridges and the Weston family have been contacted, but had not responded by the time of publication.

In July last year Selfridges announced it would cut 450 jobs.

Lockdowns have meant tough times for many physical retail stores. Most outlets were forced to stay shut for large parts of 2020 due to the ongoing restrictions – and many were suffering before the pandemic.

Where rescue deals have been signed, they often involve running the stores purely online.

The department store is known for its iconic yellow bags
(

Selfridges' rival Debenhams shut its final stores last month after 242 years of trading, and 12,000 people lost their jobs. New owner Boohoo said the business will run online-only, as it plans to dip into the world of homeware retail.

Topshop owner Arcadia went into administration at the start of December with a £750 million deficit.

However, Asos said it will not reopen any of the stores. Around 300 Arcadia staff were kept, but 2,500 were not.

Elsewhere, American clothing chain Gap plans to close 19 shops in the UK and Ireland by the end of July, leaving 50.

Back in 2019 it closed more than 200 stores worldwide amid plunging sales in a bid to save the brand.

Last month seven people were arrested after a man was stabbed in a mass brawl inside the London branch of Selfridges.