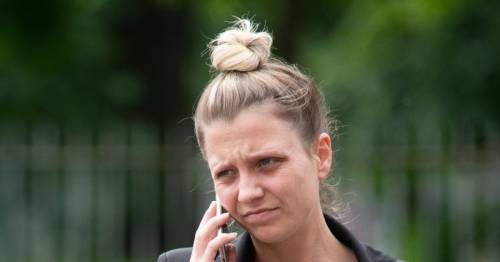 Sophie Hammonds, 28, called herself the 'professional vigilante'' and posted 'warning' videos to the app, despite her ex being cleared over unproven claims that he bullied her during their relationship

Paul Fordman was also threatened with violence in the street after the 28-year-old bakery worker used a fake account to tell women to be wary him.

Father to one of her two children, Paul stood trial last year after being accused of controlling behaviour towards Hammonds, but was acquitted by a jury.

During a malicious 'name and shame' campaign in March of this year, Hammonds, posted three TikTok videos under the banner: “Justice one way or another'' and described her ex as an ''abuser of women.''

She included screenshots of Mr Fordman's own TikTok page with voice-overs, then added his female friends so that they would see them.

Sophie Hammonds, 28, called herself the 'professional vigilante'' and posted 'warning' videos to the app
(

He later called in police saying he had been threatened with physical violence in the street by others who had seen the videos, Warrington Magistrates' Court heard.

In a statement, Mr Fordman said: “I already suffer with severe mental health conditions and these strings of incidents have played terribly with my mental health.

"I have barely eaten and I have struggled to go to sleep at night and I have been suffering panic attacks and nightmares. I felt anxious and extremely vulnerable and afraid of what Sophie will do next to me.

"I avoid going out as much as I can. My mum has been worried and stressed for my mental wellbeing and physical safety. She calls me on the phone every day to ensure that I am safe and that I am okay."

Hammonds, of Ellesmere Port, Cheshire, pleaded guilty to harassment and was banned from contacting Mr Fordman for two years under the terms of a restraining order.

Prosecution barrister Amie Gouldson said: “The messages which the defendant posted said the complainant was abusive to women, and said 'he goes for young women he can take advantage of etc'. The words “Justice one way or another’ was written at the bottom of the screen in one of the videos.

"She clearly wanted to cause distress. She has gone out of her way to create this fake account and add female friends in order to spread her message as far as she possibly could. The recordings certainly had a harmful effect on Mr Fordman.''

Defence lawyer Chris Hunt told the court that Hammonds had not been seeking revenge but was trying to warn other women of what she "perceived" as her former partner’s "maligned" behaviour.

"There is a degree of irony that she's the one in the dock today,” Mr Hunt said. "Her only other previous involvement with the criminal justice system was giving a statement to police against the complainant.

"In this country, if a jury does not believe a case is proved the person walks away without a stain on their character. That is something the defendant has had difficulty coping with although she realises two wrongs don't make a right.

"This is not a pure revenge attack – more misguided. Her intention was to warn others off what she perceived to be the maligned characteristics of her former partner. She endured endless abuse to the point where they actually charged it and took it all the way to trial. The problem is that she felt she had not been believed and was not protected. There was no restraining order at the end.

“She had to quit her job at a bakery as her mental health went through the floor. She lost a huge amount of weight.”

Mr Fordman later called in police saying he had been threatened with physical violence in the street by others who had seen the videos, Warrington Magistrates' Court heard
(

Mr Hunt added that Hammonds launched the page after coming across a post online about her former partner that upset her. “There were people congratulating him on being a good father, that sort of thing in the comments,” he said.

“She was upset not because of wanting revenge. She was concerned that others would be taken in. In retrospect she understands that what she did was wrong and that it constitutes harassment.”

Hammonds was ordered to complete a 12-month community order with a requirement that she attends 15 days of rehabilitative activity. She was further fined £80 with £180 in costs and a victim surcharge.

Chair of the magistrates' bench, Andrew Brothers told her: “We know events leading up to this event have had a severe consequence on your health and your employability. But whilst we can see that by posting the messages you intended to show your concern to other women, you can't make those kinds of statements – and certainly not on social media.''