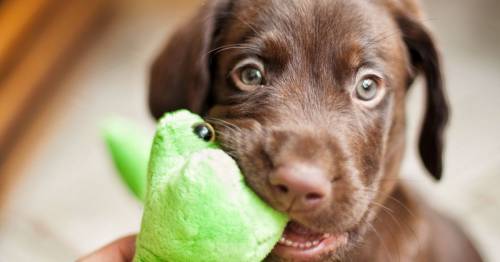 We'd all love to know what goes on inside our dogs' minds – and it seems scientists have got one step closer to finding out.

A new study has revealed how dogs think about their toys, including how they identify their favourites and imagine familiar objects.

The study was published in the Journal of Animal Cognition by researchers at Eötvös Loránd University in Budapest, and examined how "typical family dogs" use smell, vision and texture to identify teddies, balls and games.

The group of scientists found that dogs have a "multi-modal mental image" of their belongings, so are able to tell the difference between their toys.

Dogs can understand what toy you're asking for
(

Now we know that when dogs think about a specific object, they imagine the different sensory features, such as the way it looks or smells.

This means they are able to recognise particular toys that you ask for using their senses.

So, you can train your dog what a teddy bear is and they'll learn to bring it to you by the fluffy and soft texture in their mouth.

To find this out, the researchers used the same set of unfamiliar toys of different shapes, sizes, colours and materials for all the dogs.

After placing four toys in the room, the owners would play with their pet using a fifth toy.

They primarily use vision and then smell to identify objects
(

Occasionally, the owner would put a new toy among the others and reward the dog with praise, play or food when it retrieved it.

After several minutes, the dogs would take a break, and then they were asked to fetch the fifth, specific toy in different lighting conditions.

In most cases, the subjects were able to use vision to locate their toys, but in the dark, they switched their senses to rely on smell instead of looks.

"If we can understand which senses dogs use while searching for a toy, this may reveal how they think about it," explained Shany Dror, one of the leading researchers of the study.

We're one step closer to reading the minds of our dogs
(

"When dogs use olfaction or sight while searching for a toy, this indicates that they know how that toy smells or looks like."

Ultimately, the scientists were able to determine that dogs pay attention to the features of the toys they play with – even if it's only for a short period of time.

As a result, they create an image of the toy in their mind – including scent, looks and textures – to help identify and locate the object.

With this information, we can understand and begin to learn more about how dogs think about other things in the future.

Do you have a dog story to sell? Email nia.dalton@reachplc.com.

Previous : Prince William’s ‘truly eye-opening’ experience selling Big Issue ahead of 40th birthday
Next : Boy, 12, has bones that can shatter at the slightest touch like he’s ‘made of glass’ – World News