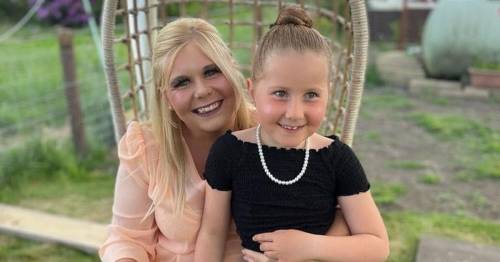 Schoolgirl, 7, dies one day after being sent home from hospital with ‘migraine’

A heartbroken family are grieving the loss of a seven-year-old girl who died after being sent home from hospital with a suspected migraine the day before.

Little Theia Mckie, seven, from Dumfries, Scotland died on Wednesday, after screaming in pain when she looked at lights, and bouts of vomiting.

On Monday she was rushed to Dumfries and Galloway Royal Infirmary by her worried mum, but the following day she was allowed home with the diagnosis that she had a migraine.

However, her parents Tracey and Ainsley Mckie, were unconvinced and her mum told pals on Facebook : “So we got little missy home but she’s no better.”

Mum Tracey Mckie has led tributes to her little girl

A post mortem into the youngster’s death has still to be carried out and the family are keen not to apportion any blame until they are sure what caused her death.

Tracey posted a photograph of her daughter and wrote: “We simply have no words.

“We are lost beyond comprehension.”

And, heartbreakingly, she added: “Theia, sweetheart 7 years of you will never ever be enough for mummy and daddy.”

“We are lost beyond comprehension," Theia's mum said

But she said: “As we don’t know why Theia passed away we can’t comment. Hopefully the results of her post mortem will give us answers.”

And she added: “We are not wanting any blame laid until we find out why she passed.”

In a statement the health board said: “We are unable to comment on any individual case due to patient confidentiality.”

Previous : 12 countries that could move back to the red list this Christmas as Covid cases surge
Next : Explainer: Sudan’s political transition in the balance