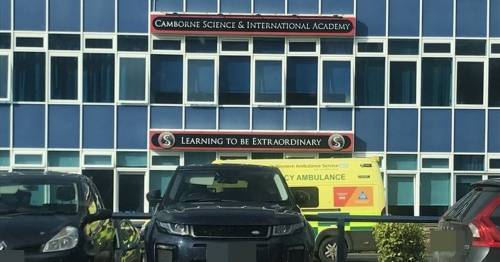 A school in Cornwall has been rocked after a "much loved" staff member died on the grounds.

Police and paramedics descended on Camborne Science & International Academy at around 2.30pm on Thursday following reports of concern for the welfare of a man, Devon and Cornwall Police confirmed.

And a school spokesperson then clarified a "much loved and respected" colleague had passed away on site, reports CornwallLive.

They said: "It is with deep regret that a much loved and respected colleague of Camborne Science and International Academy passed away on Thursday 14th October in school.

The school has confirmed a much-loved member of staff died
(

"Our thoughts and sincerest sympathies are with their family. We ask for your respect and privacy as we support our school’s community through this time."

The school said it will be supporting the staff member's family.

The circumstances surrounding the incident have not been revealed.

And the identity of staff member has not been released.

Witnesses had spotted a police car and three ambulances outside the school in Cranberry Road.

In a statement, the police force said: "Police were called by the ambulance service at 2.30pm on Thursday 14 October to Cranberry Road, Camborne, following reports of concern for the welfare for a man.

"The incident is ongoing at this time."

Previous : Wife cries every night as flies invade home due to rat-infested corn pile on doorstep
Next : Explainer: Why is Lebanon such a mess?