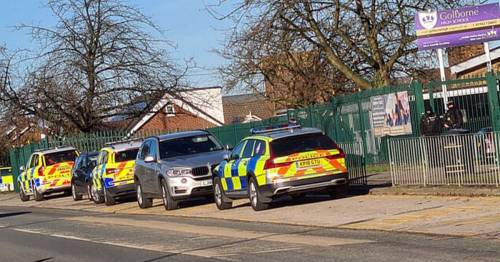 A school in Greater Manchester is on lockdown after a person made a gun threat on the internet.

Armed officers rushed to Golborne High School in Wigan after receiving reports of someone claiming to have a gun.

The school has been put on lockdown as a precaution, the Manchester Evening News reports.

A group of parents were seen gathered outside the school gates this afternoon as cars lined up on the adjacent road.

The concerned families, who live nearby, said they rushed to the scene after seeing social media posts about the incident.

One said it was "scary" when they tried calling their child but got no response.

“I had no idea what was going on, I called them and got no response. It was scary,” they said.

Another parent said: “I was with my wife at home and we got a call that something had happened so I shot down here.”

Several cop cars and vehicles used to transport armed officers were seen by the school gates.

Manchester police confirmed they responded at 10.42am this morning to an "individual making threats and claiming they had a 'firearm'".

Greater Manchester Police said: "At around 10.42am today 22 November 2021), police were called to reports that an individual was making threats to Golborne High School, Golborne, claiming they were in possession of a firearm.

The school has been put on lockdown as a precaution

"Armed officers have been deployed to the scene and the school has been locked down as a precaution.

"The threats were made over the internet and no-one has approached the area with a firearm."

Police were called to Golborne High School at around 10.42am following reports of an 'individual making threats and claiming they had a 'firearm'.