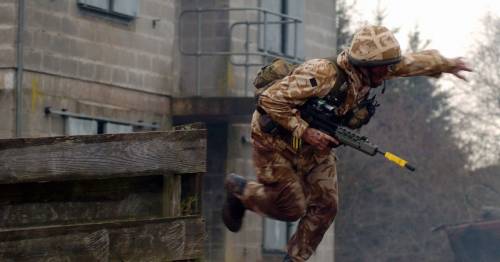 The SAS have encountered a terrain even they can’t survive on for long… a football pitch.

Whenever a kickabout is part of their training, it’s been a case of who dares is likely to get a torn hamstring or groin strain.

Now commanders have banned troops from playing footy after estimating that more of them
are hurt on the pitch than when they go into action.

Sources say match injuries have ranged from strained muscles to broken legs, with some soldiers having to be evacuated from war zones. One was even medically discharged.

An insider said: “Like everything the SAS do, exercise is full-on and very competitive. Guys started picking up ­injuries after every game.

"Some couldn’t deploy on operations because they had a twisted ankle or ligament damage.

“When you have a small number of highly trained troops, losing one or two can quickly become a problem.”

Troops are expected to work out for at least an hour a day, but a senior Army medical officer told us football is likely to cause more non-battle injuries than any other SAS activity.

Our source added: “The SAS will sometimes ship gym equipment from their Hereford base to another country if they are likely to be there for several months.”

But it seems sports like football put the boot into our toughest soldiers. The MoD will not comment on special forces.