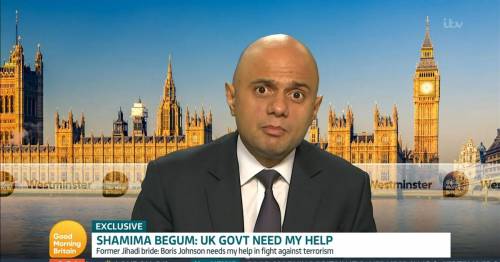 Speaking minutes after Shamima appeared from a camp in Syria on ITV's Good Morning Britain, Mr Javid appeared on the channel to say he stood by his decision to revoke her UK citizenship.

Shamima, who fled her home in east London aged 15 to join the so-called Islamic State terror group in Syria, made headlines this morning as she begged Brits for forgiveness.

She pleaded with the British government to allow her to return to the UK, saying "I would rather died than go back to ISIS".

The 22-year-old also denied all allegations made against her, such as stitching terrorists into their suicide vests in such a way that they couldn't never get out of them or if they did they would detonate.

Addressing his decision to revoke Shamima's UK citizenship, he said: "I won't go into details of the case, but what I will say is that you certainly haven't seen what I saw."

He added: "If you did know what I knew, because you are sensible, responsible people, you would have made exactly the same decision – of that I have no doubt."

During her interview this morning, Shamima looked different from her last TV appearance as she wore a Nike baseball cap and grey vest.

Begum said she went to Syria expecting simply to get married, have children and "live a pure, Islamic life".

"The reason I came to Syria was not for violent reasons."

She added: "At the time I did not know it (so-called Islamic State) was a death cult, I thought it was an Islamic community I was joining.

"I was being fed a lot of information on the internet by people."

She said she thought she was "groomed and taken advantage of and manipulated into" travelling to Syria.

Pleading with the British government to allow her to return to the UK, she said: "I am completely sorry to anyone who is affected by ISIS".

Previous : Doctors thought mum’s jaw pain was due to stress but it was terminal cancer
Next : UK warned ‘winter is coming’ as PM fails to rule out vaccine passports for pubs