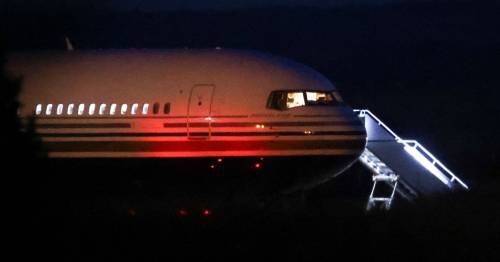 Priti Patel’s “immoral” plan to fly unwanted asylum seekers to Rwanda could be held in limbo for months after an epic court fight.

But the number of asylum seekers on board the 200-seater Boeing 767 was whittled down to zero with minutes to spare before last night’s 10.30pm take-off.

The Home Secretary said preparation for the next deportation flight to Rwanda "begins now" and “many of those removed from this flight will be placed on the next”.

But lawyers told the Mirror last night’s decision could mean the flight is grounded for at least a month, until a full hearing takes place into whether or not it is legal.

It’s understood Home Office officials were in a flurry of meetings to work out the next steps ahead of Priti Patel giving a statement to Parliament this lunchtime.

So what is the European Court of Human Rights, what did it decide about the Rwanda refugees policy and what happens next? Here’s what you need to know.

A bid to hold Britain’s first forced removal flight of asylum seekers to Rwanda was grounded by legal actions.

Over three days the High Court, Court of Appeal and Supreme Court in the UK all refused to grant an injunction to stop the flight taking off.

However, the number of people on the flight was whittled down to single figures after individual legal actions.

There were about seven passengers left when late last night, in a last-ditch intervention, the European Court of Human Rights stopped one of them getting on the plane.

The case was an Iraqi asylum seeker, KN. The court said he should not be sent to Rwanda until UK courts decide whether the policy is legal.

This full High Court hearing is only due to kick off in July.

The appeals were considered by an out-of-hours judge on papers – enraging the Home Office.

What is the ECHR and European Court?

The European Court of Human Rights (ECtHR) is an international court set up in 1959.

It rules on alleged violations of the civil and political rights set out in the European Convention on Human Rights (ECHR).

Its judgments are binding on the 46 Council of Europe member states that have ratified the Convention.

The ECHR protects people from unfair trials, torture, slavery and invasion of privacy.

It was drawn up after the Second World War by the Council of Europe – an organisation Boris Johnson's hero Winston Churchill was key to founding.

It is not an EU institution and Brexit has not affected the UK's relationship with the Strasbourg court or the ECHR.

The European Court of Human Rights is based in Strasbourg
(

What happens now with the first Rwanda flight?

Human rights lawyers suggested Priti Patel will have to wait until after the full hearing in July before sending the flight.

Home Office officials believe they are unable to appeal against the interim measure from the European Court.

And human rights barrister Adam Wagner told the Mirror: “Realistically there’s going to be no flight until the full hearing of the issues taking place in July in the High Court.

“I would be amazed if there was a flight between now and then because the European court will just say this issue hasn’t been examined yet by the UK court.”

She said: “The European Court of Human Rights has recommended that there are no other flights’ proposals put together until the substantial judicial review hearing into the whole policy is heard.

“We're expecting that that would take place in about six weeks time during July.

“Wait until we have the decision first and then decide whether to go ahead."

But sources did not completely rule out sending a flight before the High Court hearing, suggesting it might depend on whether every single refugee on the flight gets an explicit measure in their favour from the European Court.

If the High Court approves the policy, will everything go smoothly?

Whoever loses in the High Court – campaigners or Home Office – will try to appeal to the Court of Appeal and Supreme Court.

And even then, individual people on the plane can submit legal actions to try to get themselves off the flight.

Human rights barrister Adam Wagner told the Mirror: “Every flight will become a drama like this – this isn’t the end of it.

“It is a foolish policy because it will just end up with court challenges – it’s almost designed to create them.”

He added: “The government will put their effort into justifying their policy at the judicial review at the full hearing in July and if they win that, the policy can go ahead – but that’s not to say there won’t be individual challenges.

“Each decision to send any individual to another country with a pretty dodgy asylum process is inherently risky – if there’s any potential risk to this person, that risk will be amplified by sending them to Rwanda.”

Could we pull out of the ECHR?

Boris Johnson appeared to threaten to do this, though Cabinet minister Therese Coffey played down those fears.

Tory ministers have been threatening to pull out of the European Convention on Human Rights for a long time but never got round to doing it.

Never mind the outrage that would ensue from human rights campaigners, it’s also part and parcel of UK law.

It is encoded into the Human Rights Act, and is a fundamental part of a law of Northern Ireland after the Good Friday Agreement.

Boris Johnson said in 2016: “I am a supporter of it. I think it was one of the great things we gave to Europe.”

Anyone the Home Office deems “inadmissible” to claim asylum in the UK can be forcibly removed to Rwanda on a one-way charter flight.

They will have no option to apply for asylum in Britain – and must instead make an asylum claim in Rwanda.

The scheme focuses on people who arrived in the UK by “illegal” means, such as small boats in the Channel or refrigerated lorries.

They will be put in detention centres in the UK, before being put forced onto a flight to Rwanda with five days’ notice.

The first arrivals are set to be put in a hostel called Hope House in the capital Kigali, which has 50 twin rooms and communal toilets, while they apply for Rwandan asylum which takes three months. They will not be detained.

The Home Office claims it is legal, due to new rules waved through last year.

A post-Brexit shake-up made it easier to deem people “inadmissible” to claim asylum, if they passed through a “safe third country” on the way here.

That cuts off their bid for UK refugee status at the first hurdle.

People deemed “inadmissible” can be sent back to the country they passed through on the way to Britain. But crucially, the new rules say they can also be removed to “any” other safe country “that may agree to receive them”. That is the legal basis of sending people to Rwanda.

Will it be ruled illegal?

The High Court, Court of Appeal and Supreme Court have all declined to issue an injunction that would stop the first flight on June 14.

But they have not yet heard any arguments about whether the policy itself is lawful. These are set to begin in July in the High Court.

If the policy is defeated in the courts, it could lead to a farcical situation where asylum seekers are flown to Rwanda – only to flown back weeks later.

Courts were given an "assurance" that, if the policy is later ruled unlawful, steps will be taken to bring back any migrants who were flown under it.

Who's paying for refugee flights to Rwanda and how much will they cost?

British taxpayers are paying for the policy – and it’s not cheap.

The deal itself pays an “initial” £120m to the Rwandan government but this is for things like assimilating people into Rwandan society.

It does not appear to include processing and detention while people are still in the UK, or the hundreds of thousands spent on each charter flight.

But the cost of Rwanda removal flights will be higher than this, because the vast majority of those flights were only to eastern Europe.

That bill also excluded the cost of “escorts”, to ensure people being forced to leave the UK do not escape or harm themselves or others.

The Home Office insists the asylum system costs £1.5bn a year by comparison, including £5m on hotel costs per day.

A Home Office source argued: “Can people really put a price on the cost of saving human lives and securing our nation's borders?”.

How many people will be sent to Rwanda?

By the looks of things, far fewer than ministers boasted.

Boris Johnson told journalists Rwanda had “capacity” to take tens of thousands in “years ahead”.

But Deputy Prime Minister Dominic Raab later admitted it was “more likely to be in the hundreds” each year.

The first flight is an example of how the numbers will be whittled down due to repeated legal challenges on individuals’ behalf.

For context, 100,000 asylum seekers were waiting for an initial Home Office decision at the end of December.