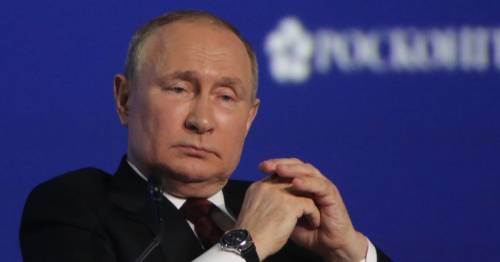 Speculation is mounting in Russia about Vladimir Putin’s health and who will succeed him, Western officials have said.

There is no "immediate threat" to the Russian President's grip on power from elites or the public but there is "more chatter" about his future, they believe.

While loss of support for Mr Putin is likely to come too late to bring the Ukrainian war to a swift end, an official said there is growing talk about who will replace him.

"There is more chatter about his health, more speculation about succession," an official said.

"One of my contacts said to me President Putin did look tired and a bit old but he has dragged his country back 40 years in four months."

More than 20,000 Russian soldiers are believed to have been killed in the bloody invasion of Ukraine, which has run for nearly four months.

Officials believe the 2024 Presidential election is "looking more interesting than it did six months ago".

“The damage he is doing to Russia 's standing in the world, to the Russian economy, to Russia’s future… there will be political consequences," one said.

They added: "I think the potential opening is 2024 – if the election does happen. But Russians do like their elections, even if they do like managing them as well.”

Western officials think younger people in big cities are sceptical of the Kremlin's rhetoric compared to older people living in more remote areas, who are more supportive of the war.

The Kremlin has not rebranded its invasion of Ukraine from a “special operation” to a “war”, which officials believe shows "high nervousness" about how ordinary Russians view the conflict.

Officials think mass mobilisation is "about to happen" in Russia, with the Government recruiting people in poorer regions to fight in Ukraine.

But Moscow is "concerned" about mobilisation as it would be an "admission of failure" in what was intended to be a lightning strike invasion.

It comes as Boris Johnson told Cabinet that Ukraine should not be forced into a "bad peace" and warned allies against succumbing to "growing fatigue" from the war.

He told top Tories "we must not allow anyone to believe that making concessions to Putin would lead to anything but disaster", his spokesperson said.

The PM also said Britain would work to "drain the grain from Ukraine" as "the bombardment of cities and infrastructure and the blockade of ports is crippling Ukraine's ability to export its produce".