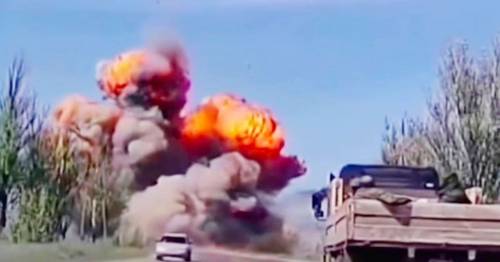 The moment a Russian tank was blown up and its turret blasted 250ft into the air has been captured on video.

In dashcam footage of the explosion – which was triggered by a Ukrainian missile strike – the armoured vehicle is seen driving along the road.

Suddenly a great fireball erupts around it, casting a big chunk of metal high into the sky.

In the chaos several figures, presumably Russian soldiers, frantically scramble for cover from the wreckage.

The video was filmed by the Chinese state media channel Phoenix TV, which shared a clip of its journalist's close encounter with the inferno as they were making their way to the Azovstal steel plant in the besieged city of Mariupol.

The tank was engulfed in a huge explosion

"Phoenix reporter Lu Yuguang escaped death during the interview in eastern Ukraine," a description on the video reads.

"Phoenix Satellite TV dispatched a front-line interview team from eastern Ukraine to go to the Mariupol Azov Steel Plant on May 6 to track and report the evacuation of civilians by the United Nations, the International Committee of the Red Cross and the Russian military organisation."

In recent weeks attention has been turned to Russian tanks and what some military experts are claiming is a design flaw.

A number of the armoured killing machines have been pictured with their tops blown off since the start of the conflict.

Some have claimed this is the result of the shells being stored within their turrets, which causes an even bigger explosion when they're hit.

Even an indirect strike on the tanks can cause the shells to spark, in turn triggering a huge chain reaction.

The turret can be seen flying high into the air

Security expert Sam Bendett told CNN: "What we are witnessing with Russian tanks is a design flaw.

"Any successful hit… quickly ignites the ammo causing a massive explosion, and the turret is literally blown off."

Last week the Ukrainian military released a video of a different, more modern Russian tank being destroyed in battle.

Drone footage shows the T-90M – a £4million war machine – exploding after being hit during the battle for Stary Saltiv, to the north of Kharkiv.

The Ukrainian MoD claimed the tank was taken out by a Carl Gustaf recoilless rifle – a Swedish-made rocket launcher that costs around £18,500.

"The pride of the Russian tank industry was destroyed by the Swedish hand-held anti-tank grenade launcher Carl Gustaf," the ministry said in a tweet.

"We thank the Swedish people and the King for their help."

The Ukrainian Ministry of Defence claims 1,122 Russian tanks have been destroyed as of May 7, from a total of 2700 main battle tanks they had in their arsenal at the start of the war.