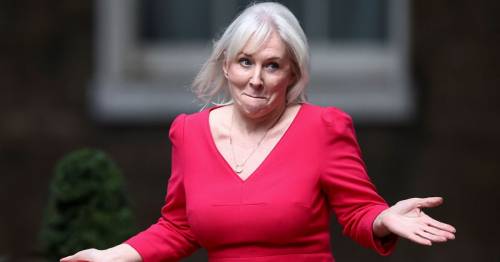 She claimed the location of some properties affected a key Conservative election commitment to boost internet connections.

The party’s 2019 manifesto said: “We intend to bring full fibre and gigabit capable broadband to every home and business across the UK by 2025.”

However, that was later downgraded to 85%.

Giving evidence to the Commons Digital, Culture, Media and Sport Select Committee today, Ms Dorries claimed: “It’s not that we can’t go fast enough, it’s that the workforce to be able to deliver gigabit broadband across the country to 100% of homes is one of the issues, as well as the geographical location of some of the homes.

“It isn’t that the Government doesn’t want to get 100% broadband.”

She added: “We are of course hampered by the number of hands we can get onto shovels and the number of skilled people we can have with telecommunications skills.”

But, reminding her of the commitment on which she was elected, committee chairman Julian Knight, a fellow Tory MP, told her: “We promised it, it was an election promise.”

Asking Ms Dorries if she was “recommitting the Government to the 100% target” for coverage, he added: “The election target was 100% and it was effectively then cut to 85%.”

Ms Dorries, who admitted she had not signed-up to gigabit broadband despite it being available in her village, said: “The target is 85% coverage.”

But she claimed it “is our ambition to have gigabit broadband in as many homes as possible, as fast as possible”.

The two-hour session, Ms Dorries’ first in front of the committee since her shock elevation to Boris Johnson ’s top team, became heated when she was grilled about her history of attacking journalists on Twitter.

She was also forced to defend her criticism of some left wing figures.

Asked what a "snowflake leftie" is, she joked: "Probably my kids."

Asked what an "Islington leftie" is, she replied: "Again, one of my kids."

During wide-ranging exchanges, the Cabinet Minister – who chomped on ostrich anus, lamb’s testicle and other exotic delicacies during her 2012 jungle stint on I’m A Celebrity … Get Me Out of Here! – was also asked about the decision by Brit Awards’ organisers to scrap the “best male” and “best female” categories.

Admitting the announcement had passed her by, Ms Dorries told MPs: "I have to say it is the first I am aware of it, but I think it sounds quite a sad decision.