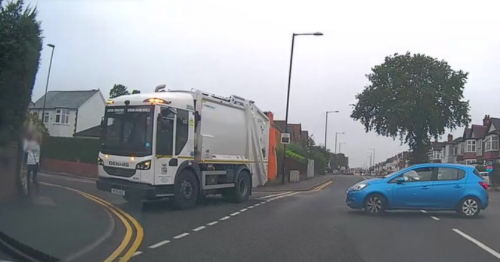 A "runaway" bin lorry narrowly missed a dog walker as it careered down a road and smashed into a wall.

The near-tragedy happened in Sutton Coldfield, Birmingham just before 8am on Wednesday morning.

The 26-tonne truck, said to be without a driver at the time, had rolled and picked up speed, going over the centre line inches away from a woman and a dog.

Two motorists were coming in the other direction at the same time.

Witnesses told BirminghamLive the dog walker had to run to avoid being hit by the truck while the driver slammed on their brakes and reversed to get out of the way in time.

The refuse truck then smashed in a garden wall, crumbling it and also hit two cars on a driveway.

Victoria Williams said it was "lucky no one was killed".

She had just dropped off her kids at school and was going to work when she saw the crash unfold.

The 38-year-old teacher said: “I don’t know how it came about but there was a bin lorry with no driver in it coming down Jockey Road.

“It wasn’t my usual route. It was about 7.50am and I was driving towards Boldmere.

“As I have come past Sutton Girls there was a blue Corsa in front of me.

“Suddenly we could see this refuse truck hurtling towards us on the wrong side of the road."

She continued: “At that point I saw there was wasn’t a driver in the cab and the door was open.

“The driver in front of me put his Corsa in reverse and I did the same. We got out of the way.

"There was a poor woman with a dog and first of all she froze. And then she had to run out of the way. She had been walking in to Britwell Road when the truck came towards her. I spoke to her afterwards and she was really shaken up.

“It very nearly was a tragic accident. It could have killed her.”

When Victoria was driving along the road she said she didn't notice anything was wrong.

She said: “Initially the truck was coming on the correct side of the road by the flats. Nothing seemed to be wrong.

“But then the truck came over the middle of the road. It was sheer fluke that the refuse truck stopped in the guys garden and didn’t hit anyone.

“The refuse guys said they were at the flats on the right-hand side as you head towards Boldmere.

“The driver said he got out of the cab and went to get a bin. Had in not been in neutral the alarm would go off. And if the handbrake wasn’t on it would have moved straight away.

“It could have been so much worse."

The school teacher, who was late in to her job, added: "The first thing the guy in front said to me was ‘I’m sorry I have just reversed at you’.

“But if he hadn’t it would have been a head-on collision with his car and it would have hit mine too. It was quick-thinking by him that probably saved us. We were all incredibly lucky.”

The bin lorry smashed through a brick wall and damaged two cars, one believed to be an Audi. There were no injuries and the ambulance service did not attend.

West Midlands Police attended the incident and said it would investigate what happened.

A Birmingham City Council spokeswoman said: “The cause of incident is being investigated and thankfully no-one was hurt.”

Previous : Five factors that could plunge England back into Covid clampdown this winter
Next : Olympians Simone Biles, Aly Raisman among star gymnasts who say the FBI badly mishandled the Larry Nassar investigation