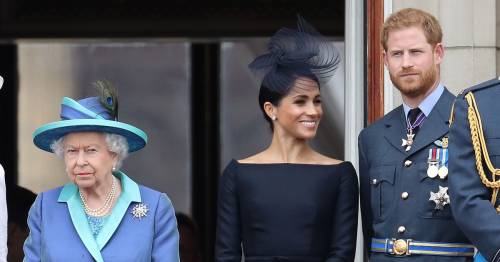 Royals ‘will be relieved’ if Harry and Meghan don’t return for memorial, claims expert

The royals will "breathe a sigh of relief" if Prince Harry and Meghan Markle fail to make Prince Philip ’s memorial, an expert has claimed.

The Duke and Duchess of Sussex were expected to return to the UK later this year to join the Queen and the rest of the Firm to celebrate the monarch's Platinum Jubilee.

While Her Majesty also agreed for a Service of Thanksgiving at Westminster Abbey for the late Duke of Edinburgh to be held on an as yet unspecified date, reports the Daily Star.

Harry, 37, attended his grandfather's funeral alone last April after jetting over from the US without Meghan, 40, who was pregnant and advised not to travel by doctors.

But the Duke has since raised concerns over security for himself, his wife and kids Archie, two, and Lilibet, seven months, putting any future trips in doubt.

The Sussexes were stripped of the strict taxpayer-funded protection afforded to senior royals on stepping down in 2020.

Harry did offer to pay for Met officers out of his own pocket for any such trips but this was denied by the Home Office.

Royal expert Ingrid Seward claims the family will find "relief" at the couple potentially not attending the tribute to Philip as she believes it could become the “Harry and Meghan show”.

Speaking to Fabulous, Ingrid said: "I think if they choose not to come then everyone will breathe a sigh of relief.

"It is thanks-giving for Prince Philip and we don't want it turning into the Harry and Meghan show."

Harry is worried for the safety of his family
(

Harry recently released a statement through his legal representative to reveal a bid for a judicial review had been submitted in September last year over police protection.

A legal representative for Harry said in the statement: "The Duke and Duchess of Sussex personally fund a private security team for their family, yet that security cannot replicate the necessary police protection needed whilst in the UK.

"In the absence of such protection, Prince Harry and his family are unable to return to his home.”

Royal biographer Phil Dampier said it wouldn't surprise him if the former royals didn't return to the UK for the service, suggesting the security issue gives them "a good excuse".

The statement comes as a source reported to the Mirror that Prince Charles has invited the couple to stay with him on their return to the UK as he wants to spend time with his grandchildren.