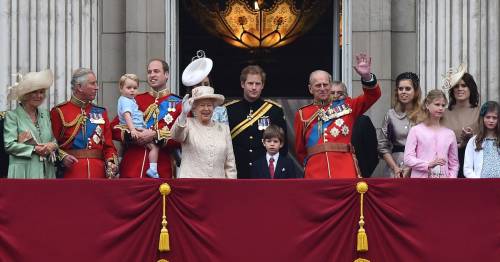 The Royal Family love watching fictionalised dramas about their lives to see how true they are, a former royal protection officer has claimed.

In recent years, there has been a string of fictionalised TV shows and films about the Royal Family ranging from The Crown on Netflix to Princess Diana movie Spencer.

It’s never been confirmed if the likes of the Queen or Kate Middleton have actually sat down in front of their TVs to watch these dramas.

But according to Ken Wharfe, a former royal protection officer who worked for Princess Diana from 1988 to 1993, the royals do indeed love to watch these types of TV shows and movies.

The Royal Family on the Buckingham Palace balcony
(

He told OK! : "The royals love that stuff. They will watch it and they have no fear of that. They’re watching it to see how true it is or how untrue it is."

However, some of these shows, especially The Crown have recently come under fire, with their historical accuracy called into question.

And Ken added: "Peter Morgan [creator of The Crown] has said himself that this isn’t a documentary of truthful facts. Some of it is truthful and some of it has a license to draw people in.

“I thought that Emma Corrin’s portrayal of Diana was brilliant. There wasn’t a great physical likeness, but she mastered the mannerisms, her walk and her speech. But one thing’s for certain, Diana didn’t roller skate around Buckingham Palace.”

The Crown season five will be released on Netflix in 2022 with filming for it currently underway.

The new episodes will focus on the royals during the 1990s – one of their most turbulent times in recent history.

The early 90s saw the breakdown of the marriages of Prince Charles and Diana as well as Prince Andrew and Sarah Ferguson.

There was also a devastating fire at Windsor Castle in 1992, which the Queen dubbed her "annus horribilis".

Later in the decade, Diana gave her famous BBC Panorama interview, where she talked about Charles's relationship with Camilla Parker Bowles.

And in 1997, she tragically died aged 36 following a car crash, leaving the world completely heartbroken.

Season five of the show will see wholesale changes to The Crown cast with the role of the Queen falling to BAFTA winner Imelda Staunton, who takes over from Olivia Colman.

The Two Popes star Johnathan Pryce will portray Prince Philip and is taking over from Tobias Menzies.

Meanwhile, the coveted role of Princess Diana has been given to Elizabeth Debicki, who takes the part from previous actress Emma Corrin.

However, speaking to True Royalty TV's The Royal Beat, royal historian Anne Whitelock said the new season of the show might not be something the royals want to watch when it is released.

She said: "If the Royal Family have found The Crown uncomfortable viewing up until now, this season is not going to give them any respite."

However, Prince Harry confessed earlier this year he has watched the show – and says it is more accurate than people think.

During an interview with James Corden, he explained it is "loosely based on the truth."

He added: "They don't pretend to be news, it's fictional but it's loosely based on the truth.

"Of course it's not strictly accurate, but loosely, it gives you a rough idea about what that lifestyle, what the pressures of putting duty and service above family and everything else, what can come from that.

"I am way more comfortable with The Crown than I am seeing the stories written about my family, or my wife or myself."