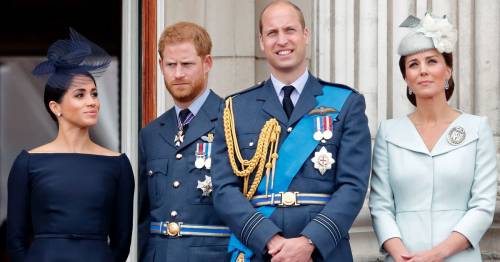 The BBC has been criticised by the Royal Family for giving credibility to "overblown and unfounded claims" in a documentary that explores Princes Harry and William's relationship with the press.

Buckingham Palace, Clarence House and Kensington Palace took the rare step of issuing a joint statement to the broadcaster.

The first episode of The Princes And The Press, presented by Amol Rajan, included suggestions that negatives stories about the Duchess of Sussex were leaked by courtiers and there was a competitiveness between their respective households.

The second episode, which will be aired next week, is expected to delve into William and Harry's rift. Royal aides are reported to be concerned it will include claims the brothers briefed against each other in the press through their advisers.

The statement from the palaces said: "A free, responsible and open press is of vital importance to a healthy democracy.

"However, too often it is overblown and unfounded claims from unnamed sources that are presented as facts and it is disappointing when anyone, including the BBC, gives them credibility."

It was unclear as to which particular allegations the royal households, who were not given an advance copy of the documentary, were referring to specifically.

In March, The Times newspaper said the duchess allegedly drove out two personal assistants and "humiliated" staff on several occasions, which she denies.

The corporation aired "overblown and unfounded claims" of a rift between Princes William and Harry, they say
(

An investigation has since been launched by Buckingham Palace and the royal household has tasked an external legal team to assist its human resources team looking at allegations made against the former Suits star.

Ms Afia said: "Those stories were false. This narrative that no one can work for the Duchess of Sussex, she was too difficult and demanding as a boss and everyone had to leave, it's just not true."

Following the airing of the programme, The Sun reported that William has always banned aides from briefing against family members after seeing the fall-out of his parents' media attacks during their split, dubbed the War of the Waleses.

The documentary also featured a private investigator who apologised for targeting the phone of Harry's former girlfriend Chelsy Davy and admitted he helped "rob" the prince of his teenage years.

Gavin Burrows, speaking publicly about the issue for the first time, said there had been a "ruthless" culture in parts of the media in the early 2000s, when he said Miss Davy's phone had been under surveillance.

Editors told him that putting Harry on the front page sold more copies of newspapers than William.

"As explained to me by a couple of editors, Harry had basically become the new Diana," he said.

The BBC says Mr Burrows is a witness in legal cases against the News of the World and The Sun, but that his claims are yet to be tested in court and are strongly disputed.

Mr Burrows said he was "very sorry" and added: "I was basically part of a group of people who robbed him (Harry) of his normal teenage years."

Pod Save The Queen

Listen on iTunes, Audioboom and your favourite podcast apps.

Catch up with Episode 1 – Royal Wedding Bells for Meghan and Harry.

The News of the World folded in 2011 after details emerged of extensive phone hacking at the newspaper.

The paper's publishers, News Group Newspapers, have settled several claims brought against it by a number of high-profile celebrities, including Hugh Grant and David Tennant, but has never made any admission of liability in relation to allegations involving The Sun.

The High Court heard last year that a journalist at The Sun was sent Ms Davy's phone billing data, which had been illegally obtained, by another private investigator.

Previous : Prince William and Harry’s royal feud – how it began and whether ‘warring brothers’ will make up
Next : Poland says migrants still crossing from Belarus despite steps by Minsk