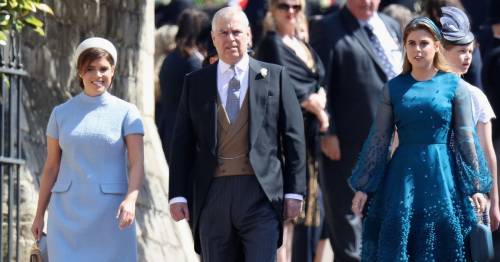 Two royals said to be "fully supporting" Prince Andrew amid his sex abuse legal case are his daughters Princess Beatrice and Princess Eugenie.

They were recently pictured on a two-week ski break in Geneva together with their husbands and children – but their dad, who vehemently denies all allegations against him, did not join them.

Prince Andrew with his daughters Princess Beatrice and Princess Eugenie
(

Andrew stepped down from public life in November 2019, just days after giving a disastrous interview on BBC Newsnight about his association with billionaire paedophile Jeffrey Epstein.

In fact, it has been claimed that Beatrice even helped her dad in setting up the interview.

After that, a source claimed there was a feeling in the family that they shouldn't suffer due to what is happening to their dad.

A source told the Daily Mail in 2019: "The Queen is particularly fond of Beatrice and Eugenie, and she respects the way that Andrew and Sarah have brought them up. Even though you may feel that they made such a mess of their own lives, they have been loving co-parents.

"The feeling is that everyone wants to protect them from this hurt and from further hurt, rather than dance on their father's 'grave'."

Beatrice and Eugenie at Trooping the Colour
(

The sisters have continued to have a good relationship with their grandmother – joining her at Balmoral in the summer holidays and popping in to see her at Windsor.

Despite not being full-time working royals, the sisters have still made appearances at big royal events.

Most recently, both Beatrice and Eugenie attended a Christmas carol concert being hosted by the Duchess of Cambridge at Westminster Abbey.

They joined other royals including their cousins Prince William and Zara Tindall and their aunt Sophie, Countess of Wessex.

However, the allegations looming over Andrew do seem to have affected his daughters.

In July 2020, there was a happy occasion in the York family when Princess Beatrice wed husband Edoardo Mapelli Mozzi in a low-key ceremony in Windsor under Covid restrictions.

Fewer than 20 guests attended – a far cry from the 2018 wedding of Bea’s sister , Princess Eugenie, to Jack Brooksbank in 2018, which was broadcast on TV.

But when it came to the official wedding photos released to the public, Beatrice's dad Andrew didn't figure in any of them.

The Queen and the late Prince Philip were the only royals shown with the beaming bride and her new husband.

The decision to release snaps without him was thought to have been taken by the family alongside advice from courtiers.

Andrew with ex-wife Sarah Ferguson and Beatrice and Eugenie
(

Andrew's youngest daughter Eugenie is one of the few royals who has a public and open Instagram account.

And she uses it to mark special family occasions – such as birthdays.

On Father's Day in 2020, she posted a throwback image of herself and her dad wishing him a happy father's day.

However, in 2021, she opted not to mention her dad and instead paid tribute to her husband Jack Brooksbank, with who she shares 11-month-old son August.

The princesses hoped Andrew would join them on the skiing holiday
(

Meanwhile, over the New Year period, Andrew has missed out on a skiing getaway with his daughters and his grandchildren.

A source told the Sunday Mirror that the sisters were "both very upset" that Andrew could not join them on the ski trip as they hoped "their children would be able to spend their first ski holiday with their grandad and the entire family".

It was believed his team advised him it would be “inappropriate” for him to be seen on holiday while facing sex allegations.

The source added: “Sadly it wasn’t to be, but they did hold Skype calls with their father nearly every day while they were in Verbier so that they could support him and he could see the grandchildren on holiday.”

In August last year, it was revealed that Andrew was being sued by a victim of paedophile billionaire Jeffrey Epstein, who alleges he had sex with her three times after being trafficked at 17.

The Duke vehemently denies the allegations and had been trying to have the civil case in the US thrown out before it can go to a trial.

But yesterday a judge ruled the case could proceed despite Andrew's objections, which means the Queen's second son is facing the prospect of an immensely damaging and costly court case in his future.

Speaking before the ruling yesterday, a source told the Sunday Mirror that Beatrice and Eugenie fully support their father.

"It’s more about them being there for him and supporting him as opposed to questioning him about the case," they said.

"That’s not what the family is focused on – it’s about survival, protecting the family name and getting through it in one piece. The girls feel their father’s name is continually dragged through the mud unnecessarily when really he is a good egg.

“They feel the whole thing is an unfortunate business and they don’t believe their father deserves what is happening to him.”

Previous : TPG listing caps 30 years of easy money
Next : Daily UK Covid cases plunge by 39% in just one week with over 109,000 reported