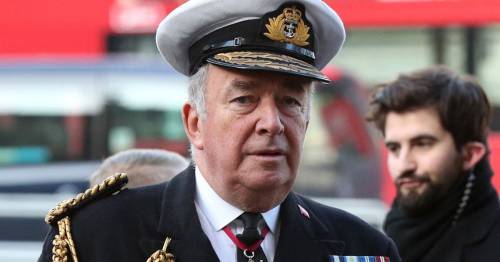 Retired head of the Navy Admiral Lord West told peers the pace of government orders for new warships meant the Senior Service was at risk of dropping below 13 frigates.

The existing fleet of Type 23, Duke-class vessels – some of which are 30 years old – is being replaced by eight, Type 26 City-class Global Combat Ships and five Type 32, light frigates.

But Lord West, who commanded HMS Ardent in the 1982 Falklands War, feared the Navy fleet would dip below 13 frigates.

The Type 23, Duke-class frigates, such as HMS Montrose, are being replaced
(

He added: “The Government said that we would have and keep a minimum of 13 frigates – which is, after all, pretty damning for a maritime nation like us.

“When one looks at the order rate for frigates, and the possibility of the rolling programme which so many shipyards need, one has to say that we are not going to have 13 frigates as we move into this decade.”
He added: “As someone with an intelligence background, I would think it would be considerably less.”

Defence Minister Baroness Goldie did not dispute the warning.

But she told peers that “we have for the first time in 30 years two classes of frigate simultaneously under construction in UK shipyards”.

Construction of the Type 26, City-class vessels, known as the Global Combat Ship, is underway
(

She added: “The Ministry of Defence expects to place an order for the batch two Type 26 frigates in the early 2020s and to award a manufacture for the Fleet Solid Support ships (FSS) within two years from May 2021.

“The Defence Secretary has said that he aims to have the National Flagship in the water by 2024 or 2025.

“No decisions have yet been taken on order dates … for the Type 32 frigates.”

Mocking Government pledges of a British shipbuilding revival, Lord West told the Upper House: “It sounds marvellous and indeed having a Prime Minister who says that nothing does more for the security of our nation than building a warship for the Royal Navy obviously cheers a sailor like me up.

“But the reality is that 12 months ago he made these statements and not a single order has been placed since then.”

Boris Johnson has also announced plans for a National Flagship, seen as a replacement for the Royal Yacht Britannia
(

He said that in 56 years “on the active list” he was “scarred” by “hearing numerous things about ships coming and never joining the Fleet”.

Former Defence Minister Kevan Jones, a Labour MP who sits on the Commons Defence Select Committee and chairs the All-Party Parliamentary Group on Shipbuilding, told the Mirror: “The Government’s schedule to replace a significant number of Type 23 frigates by the mid-2020s looks increasingly unlikely.

“As such, the Royal Navy is on track to have its lowest number of frontline warships on record, by the mid-2020s, chiefly owing to a frigate capability gap which is all the government’s own making.”

Unions urged the Government to speed-up orders to protect workers.

Confederation of Shipbuilding and Engineering Unions general secretary Ian Waddell said: "The national shipbuilding strategy clearly sets out a drumbeat of naval procurement which is designed to maintain our sovereign capability to design, manufacture and maintain our naval and auxiliary fleet.

Image:
Courtesy of the CSEU)

"We need to get on with delivering it in order to safeguard the safety of the nation and safeguard our world class shipbuilding capability and pump investment into our shipbuilding communities in every part of the UK which will be spent in local shops and businesses".

"The Prime Minister made much of a high wage high skilled economy in his speech last week but we've already got one in shipbuilding and we are at risk of losing it unless we get on with ordering and building these ships in British shipyards".

GMB union national officer Ross Murdoch said: "The Government’s dither and delay over the five-ship, Type 31 frigate contract could lead to our aircraft carriers being left with less frigate protection than they require.

“Ministers must learn lessons from this and make sure there are no further hold ups to the FSS contracts.

"Instead of unclear and veiled comments about significant proportions of the work for the UK, they should confirm the design, build and final assembly work will be carried out in our yards and will support our supply chain.

"This will provide the much-needed prosperity our UK shipyards and workforce need and help rebuild the UK economy."