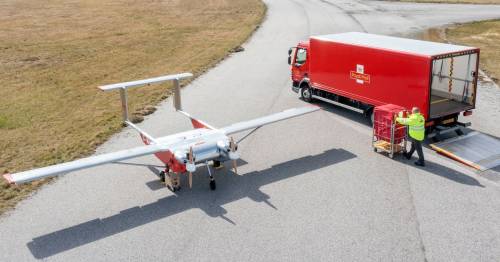 Using drones to deliver packages is not a new concept, though it remains an exciting one.

Amazon Prime first proposed the idea in 2016, though it had a troubled start and limited launch.

Now Royal Mail will be aiming for a much smaller scale than Amazon’s old plans, and so far it looks to be on track for success.

Drones have already been used by the service but in a very limited capacity, but now it is rolling them out in a much more significant way.

Up to this point, Royal Mail mainly uses ferries and conventional aircraft to get to harder-to-reach places, and this rollout could completely change the current infrastructure.

Why is Royal Mail using drones?

Royal Mail operates across the entirety of the UK, but some places are harder to reach than others.

The British Isles are just that – islands, meaning the classic red van can’t simply rock up to some addresses.

Up until this point, some places were only accessible by boat or plane, making it an expensive and costly venture to get your post.

With a fleet of drones at its disposal, it will be far easier for Royal Mail to make these difficult deliveries, hopefully saving time and money.

Where will Royal Mail drones operate?

The drones are being used at a variety of island areas
(

Royal Mail said it was aiming to use up to 200 drones over the course of the next three years, up until 2025.

This would increase its current fleet to more than 500 across the country.

Drone delivery has mainly been in the trial stage over the last 18 months.

The main areas for the trial included the Isle of Mull in Scotland, the Isles of Scilly off the coast of Cornwall, and parts of the Orkney Islands.

New services will see test flights between Tingwall Airport in Lerwick and Unst, which is a 50-mile flight each way; the Isles of Scilly, the Shetland Islands, Orkney Islands and the Hebrides.

Each drone is capable of carrying up to 100kg of mail. It drops its deliveries at the destination, and then letters and parcels can be dropped through people's letterboxes by the local postie.

What has the Royal Mail said about the new drone service?

The drones will help with cutting down C02 emissions
(

Not only is the service hoping to make access to areas easier, but it should also help with CO2 emissions.

Simon Thompson, chief executive of Royal Mail, explained: “On-time delivery regardless of our customers’ location or the weather, whilst protecting our environment, is our goal.

“Even though we go everywhere, Royal Mail already has the lowest CO2 emissions per parcel delivered. This initiative will help reduce our emissions even further.”

Stephen Wright, chair of the Windracers Group, said: “The middle mile of supply and logistics, especially to remote locations, has long been overlooked by the industry and is ripe for innovation.

“We’ve spent the last five years focused on developing the most commercially viable essential logistics drones so we’re truly delighted to be working with Royal Mail on this ambitious and pioneering deployment of autonomous aircraft.”