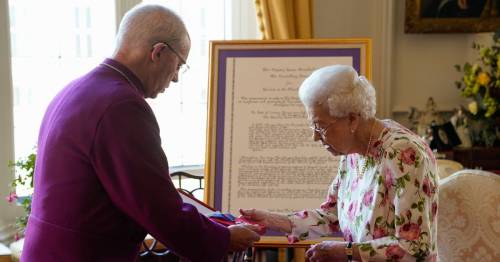 Royal fans were delighted to see brand new pictures of the Queen being presented with a special award for her "unstinting service" over the past 70 years.

They showed Her Majesty standing without her walking stick as she was given the Canterbury Cross to recognise her contribution to the Church of England over her long reign.

The 96-year-old head of state held a face-to-face audience with the Archbishop of Canterbury at Windsor Castle yesterday to receive the award after missing Royal Ascot last week.

And royal watchers were quick to point out a new detail about the Queen's appearance in the images – her much shorter hairstyle.

Royal fans noticed something different about the Queen
(

The monarch's hair appeared to have been cut into a short elegant style – although she still had her trademark curls.

One fan wrote on Twitter : "So happy to see Her Majesty looking so well and healthy. Beautiful outfit and I love her new haircut."

While another said: "Her Majesty looks lovely as always."

Meanwhile, on Instagram, one fan commented: "Lovely haircut Your Majesty!"

And another wrote: "The Queen has changed her hairstyle? Never seen it this short.. pretty dress."

It's not known who may have given the Queen her latest new hairstyle. However, close friend and trusted aide Angela Kelly revealed she took on the role of the Queen's hairdresser during lockdown.

Angela, who has worked with the Queen since the early 90s, was given the task of washing and styling her boss' hair every week in what was dubbed 'Kelly's Salon', she revealed in an updated version of her book The Other Side of the Coin.

She admits she was so terrified for the first few weeks that she was shaking as she worked, and always needed a "stiff drink" afterwards.

But nothing was more stressful than doing the Monarch's hair for her public message to the nation, and she jokes that she needed "a whole bottle" afterwards.

And Angela was also tasked with cutting the Queen's hair before hairdressers reopened.

The Queen during her Platinum Jubilee celebrations
(

She said: "Any time the Queen was without a hat was stressful as there was nowhere to hide, so I had to get her hair perfect."

During the Queen's appearance for the presentation yesterday, the Most Rev Justin Welby gave the Queen the small silver cross, inspired by a 9th century Saxon brooch and incorporating a triquetra pattern, as a “heartfelt symbol” of the church’s “love, loyalty and affection”.

It was a tribute to her outstanding service to the Church of England and in honour of her Platinum Jubilee.

The Queen, wearing her glasses and dressed in a cream dress decorated with a pattern of large pink flowers, was photographed standing as she was shown the cross.

The monarch shook hands with the archbishop, who wore purple clerical robes, as he entered the Oak Room sitting room in the Berkshire castle.