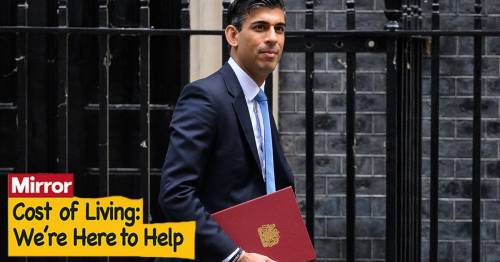 The cost-of-living crisis is a wages crisis.

The price of energy, food and fuel has skyrocketed.

And millions of households went into this crisis without any form of safety net.

And the blame for this brutal decade of stagnant wages lies with successive Tory governments.

Last week analysis by the TUC revealed NHS workers are earning thousands of pounds a year less – in real terms, once inflation is taken into account – than in 2010.

Energy bills are going up
(

And it’s a similar story across the public sector, with wages held down for more than a decade.

Meanwhile, insecure work and low pay is all too prevalent across the labour market. There are over a million workers on zero hours contracts.

And we’ve seen bosses like P&O firing workers on the spot.

Last month the chancellor finally announced a cost-of-living support package after calls from unions and charities.

His dither and delay caused unnecessary hardship and worry for millions.

And one-off payments to help families with their energy bills won’t make much difference in the long term – workers will still struggle to pay their bills this autumn.

Up and down the country, families are experiencing the biggest fall in living standards in generations.

Everything is going up except wages.

But this cost-of-living crisis is not inevitable. There is a way out.

For a start, ministers must boost the minimum wage and ban zero-hour contracts, which would drive up the incomes of the lowest paid workers.

Second – they should give workers new rights to negotiate better pay through their unions.

Third – nurses, teachers and other public sector workers must be given the decent pay rise they have earned. That would help to undo the damage of the past decade.

Fourth – the government should encourage employers to boost wages rather than handing out mega dividends to shareholders.

And lastly ministers could stop millions of families falling below the breadline by giving a proper boost to universal credit payments.

Thousands will march in London this weekend to demand better.

We’re demanding a pay rise for all workers. Dignity at work. An end to zero-hour contracts and fire and rehire. Real help with bills. And a government that listens to working people.

I hope to see Mirror readers from all over the UK in London marching this weekend.

Previous : ‘Over-60s are the luckiest around and should get their kicks for as long as they can’ – Brian Reade
Next : James Bulger’s mum ‘over the moon’ as debate into murder inquiry WILL take place