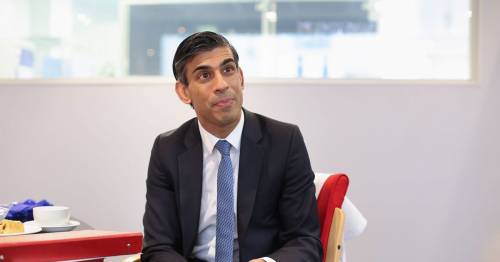 It comes as a civil war has erupted within the Tory party following the grovelling apology, and some calling for the PM's resignation.

Mr Sunak tweeted this evening: "I’ve been on a visit all day today continuing work on our #PlanForJobs as well as meeting MPs to discuss the energy situation.

"The PM was right to apologise and I support his request for patience while Sue Gray carries out her enquiry."

Gray is the top civil servant who is tasked with investigating alleged breaches of the Covid-19 restrictions at Downing Street, involving parties and gatherings during lockdown.

On Wednesday, Mr Johnson apologised for the lockdown party – and finally admitted that he was present at the event.

Rishi Sunak has broken his silence
(

The Prime Minister told MPs that he “went outside for 25 mins" to thank staff but admitted "with hindsight I should have sent them back indoors".

Gatherings were banned in England at the time under Covid restrictions.

Tory MPs sat silently, with many sitting with arms folded and looking to the ceiling when Mr Johnson began speaking ahead of Prime Minister's Questions.

Scottish Tory leader Douglas Ross called on Mr Johnson to resign, in a major blow to the PM's authority backed by a string of senior Tories including Ruth Davidson.

And Conservative MP Sir Roger Gale said it was time for the Prime Minister "to go with dignity as his choice, or for the 1922 Committee to intervene".

Mr Sunak is the latest MP to come out and express his support for Mr Johnson.

Nadine Dorries, Michael Gove and Sajid Javid tweeted earlier in support of Mr Johnson, while Deputy Prime Minister Dominic Raab said he would be in post "for many years to come".

Labour leader Keir Starmer branded his defence "ridiculous" and demanded to know if the PM would resign.

In a statement ahead of the PMQs clash, Mr Johnson said: "I want to apologise. I know that millions of people across this country have made extraordinary sacrifices over the last 18 months.

"I know the anguish they have been through – unable to mourn their relatives, unable to live their lives as they want or to do the things they love."

He added: "I know the rage they feel with me and with the Government I lead when they think in Downing Street itself the rules are not being properly followed by the people who make the rules."

Mr Johnson said he went into the garden for a short while but he should have sent everyone back inside.

The Prime Minister is battling for his political life after a wave of outrage at the latest revelations about parties in Downing Street when the country was living under Covid curbs.

A leaked email from the PM's principal private secretary, published by ITV on Monday, showed No 10 staff were invited to "make the most of the lovely weather" with a garden party on May 20 2020.