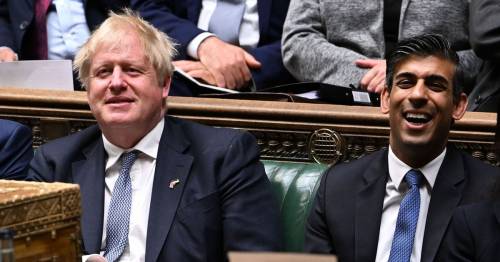 Rishi Sunak was branded the ‘Computer Says No’ Chancellor today after he blamed IT “problems” for a real-terms benefit cut to millions.

The out-of-touch Tory admitted “it sounds like an excuse” as he rejected pleas to help families who are plunging into poverty.

Speaking to the Mirror, experts dismissed the Chancellor’s claim that computer problems left him unable to act – because Universal Credit can be changed quickly.

IFS director Paul Johnson told us: “That doesn’t seem to be any kind of reason for saying ‘we will do nothing because we can’t do everything’.”

Benefits rose by 3.1% in April, based on six-month-old inflation figures. Yet inflation has already hit 7% and could top 10% by the end of the year.

Mr Sunak was asked if he would bring forward some of next year’s rise, which is expected to be above inflation, to help Brits now.

That could be similar to the £20-a-week he gave to people on Universal Credit at less than a month’s notice during Covid.

Yet he told Bloomberg News: “The technical problems – it sounds like an excuse. But the operation of our welfare system is actually technically complicated.

“And it is not necessarily possible to do that for everybody.

“And actually many of the systems are built so it can only be done once a year, and the decision was taken quite a while ago before people realised.”

They were not raised when Universal Credit got a £20-a-week uplift, with Tory ministers blaming IT problems.

IFS Director Paul Johnson slapped down the claims, telling the Mirror: “We know he can increase Universal Credit very quickly as and when he wants to.

IFS Director Paul Johnson slapped down the claims, telling the Mirror: “We know he can increase Universal Credit very quickly as and when he wants to"
(

“And the large majority of working-age people on benefits are now on Universal Credit.

“So whatever the problems with legacy benefits, it’s not an obvious excuse for not doing anything with Universal Credit.”

He said even for legacy benefits, “I’m not sure I believe it would take a full calendar year”.

He told the Mirror: “Where he can he should, given high levels of inflation, increase benefits by a measure which is closer to the inflation people are actually facing.

“And in terms of supporting people struggling with the cost of living, the most effective thing he could do right now and at the smallest cost actually would be to increase Universal Credit in line with inflation.”

Mr Johnson argued “it’s got no long term cost at all” at it would simply bring forward rises that are due later.

Though he admitted the Chancellor would likely face political pressure to raise benefits again next Spring.

He said: “Low-and-middle income households are at the sharp end of Britain’s cost of living crisis.

“And the most effective way to support them is by bringing forward the big uplift to benefits due next Spring to this year.

“The Government can do this quickly for millions of families on Universal Credit.

“The Chancellor is right to say that IT challenges make providing extra support to those with disabilities and, particularly, pensioners more challenging, taking months rather than weeks to implement.

“But the challenges facing low-and-middle income households are far greater than these administrative difficulties.

“Now is not the time for the Government to admit defeat against its own IT system.”

Shadow Chancellor Rachel Reeves said: “We are facing a period of stagflation because the Conservatives have failed to grow the economy, haven’t got a grip on the cost of living crisis and are making it worse by whacking working people and businesses with the highest tax burden in 70 years.

“This isn’t inevitable. The Conservatives need to get their heads out of the sand, stop taking to themselves and act now.

“People are really struggling with soaring prices but still the Cabinet came back from their talking shop Away Day with no new ideas and no action.

“Anything less than coming forward urgently with an Emergency Budget – including a one-off windfall tax on oil and gas producer profits – to help ease the pressure from the cost of living crisis is a failure by this Conservative government."