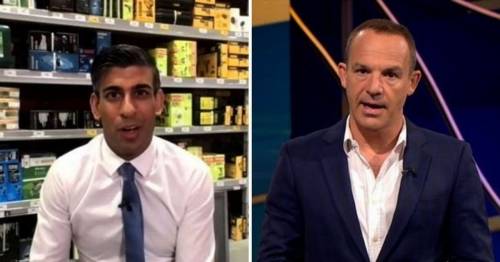 Chancellor Rishi Sunak says inflation is due to rise even further – but that it's good news for state pensioners and those on benefits.

Sunak made the comments in a Twitter interview with MoneySavingExpert founder Martin Lewis this afternoon after the Government unveiled an extra £15billion help for the cost of living crisis.

Prices are rising at their highest rate in decades, leaving families struggling to make ends meet and relying on food banks to get by.

But the rising cost of living could be good for some because some benefits are linked to it, the chancellor explained.

However, Brits will have to wait until April 2023 to see any increases to their payments.

Do you get nothing from the chancellor's announcement? Email mirror.money.saving@mirror.co.uk

Benefits like the state pension, Universal Credit and 'old-style' benefits like disability support and Jobseeker's Allowance go up every April in line with inflation the previous September.

Sunak said: "None of us know what energy prices are going to be next year.

"But what I can tell you now and what people should be reassured by is the way our system works, benefits and pensions likely, subject to a review which has to happen legally, they are likely to go up by quite a significant amount because the inflation rate that decides that is set in September."

Inflation shows the rising cost of goods and services and is currently 9% , a 40-year high.

The Bank of England thinks it will top 10% later this year .

Sunak said: "Now, that is likely to be a relatively high inflation in September.

"So that's what will happen next year for everyone's benefits and pensions, that increase is going to, most likely, be significantly [more] than the inflation we will see next year on all the forecasts that are available."

Sunak today announced the government is handing out an extra £15billion pot of money to help households through the cost of living crisis.

This includes a £400 discount to energy bills, £650 for people on means-tested benefits, £300 for pensioners eligible for Winter Fuel Payment and £150 for disability benefit claimants.

Almost all Brits will get some Government cash – but some could get nothing at all.

Shadow Chancellor Rachel Reeves said Mr Sunak had finally woken up to the pressures facing families – and said Labour was "winning the battle of ideas in Britain".

Lewis put several readers' questions to the chancellor – as well as telling him that the energy market was "broken", with consumers unable to find good deals.

Previous : Millions of Brits will get £650 payment to help with bills – see who’s eligible
Next : Tory ministers forced into humiliating climbdown over Rwanda deportation flights