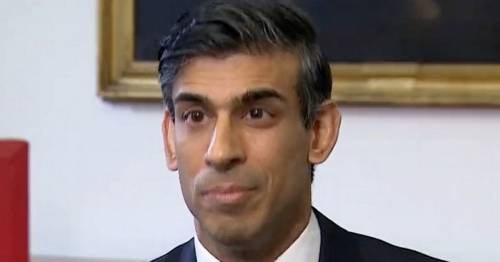 Rishi Sunak has insisted he believes Boris Johnson but abruptly left an interview after being grilled over whether the PM lied over lockdown parties in No 10.

The Chancellor said "of course I do" when asked if he accepted Mr Johnson's explanation to MPs about his attendance at a boozy bash in the Downing Street garden in the first lockdown.

But he warned that the "ministerial code is clear" on the rules for anyone who misleads Parliament – and then swiftly departed a pool interview.

An ally of the Chancellor said the interview had not been brief and he had answered more questions than the agreed three.

Mr Sunak broke cover on Tuesday after keeping a low profile while rows raged over allegations of boozy bashes in Downing Street.

Mr Johnson admitted in Parliament last week that he briefly attended a BYOB gathering in the No 10 garden on May 20 2020 – but tried to claim he thought it was a work event.

Ex-aide Dominic Cummings claimed the Prime Minister had ‘lied to Parliament’ and multiple witnesses 'would swear under oath' that he did.

In an explosive blogpost, Mr Cummings said the PM was warned that the event was against the rules but he "waved it aside".

Asked if he believed Johnson's account to parliament, Mr Sunak told reporters: "Of course I do – the Prime Minister set out his understanding of this matter in Parliament last week."

But he refused to give Mr Johnson his full backing, with a warning that the ministerial code was clear on what should happen if anyone lied to Parliament.

Asked if the PM would have to resign if it was proven he had lied to parliament, Mr Sunak said: "I'm not going to get into hypotheticals. The ministerial code is clear on these matters.

"But as you know, Sue Grey is conducting an inquiry into the situation. I think it's right that we allow her to conclude that job."

Dominic Cummings is at war with his former boss Boris Johnson
(

He then abruptly left the interview, with an aide standing in front of the camera.

Shadow Chancellor Rachel Reeves said: "Rishi Sunak is running scared once again. Instead of setting out a plan to tackle the Conservatives’ cost of living crisis – he dodges scrutiny and defends the bungling Prime Minister.

“When the Vanishing Chancellor reappears, he has a choice. He can continue his inaction and clobber our communities with tax rises and surging energy bills."

It comes as Mr Johnson was battling to save his premiership in a move supposedly dubbed "Operation Save Big Dog" by his allies.

But his authority has been badly damaged by the slew of revelations about rule-breaking parties in Downing Street, with No 10 forced to apologise to the Queen last week for the news of two dos on the eve of Prince Phillip's funeral.

Justice Secretary Dominic Raab said that ministers would be expected to resign if they intentionally misled Parliament but dismissed the idea the PM had done so.

Mr Raab told Times Radio: "The suggestion that he lied is nonsense. He's made it very clear to the House of Commons that questions on this… that he thought it was a work event."

Pressed on what would be expected if Mr Johnson had lied to the Commons, he told Today: "If it's lying, deliberate in the way you describe, if it's not corrected immediately, it would normally under the ministerial code and the governance around Parliament be a resigning matter."

Mr Raab also described the event in question as a "party" before rowing back on the remark.

Previous : Dominic Cummings says Boris Johnson ‘lied to Parliament’ over Downing Street party
Next : Repetitive tannoy announcements to be scrapped on trains in ‘bonfire of banalities’