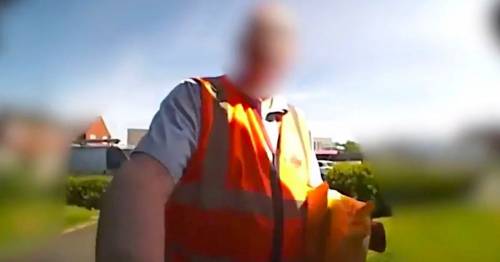 A video from a Ring doorbell has captured a postie appearing to kick family's dog across a drive.

A teenager was left in tears after a Royal Mail worker was seen on the video bell apparently attacking the animal as he delivered a parcel, Manchester Evening News reports.

The postie is heard speaking a few words before passing the delivery to the girl and the pet runs barking to the open door.

He appears to kick the dog which flies though the air across the drive before scrambling to its feet again.

The mum claims her daughter approached her in tears and says the the dog now wets itself every time the doorbell rings.

The woman's teenage daughter was left in tears
(

The Manchester Evening News reports the incident has been discussed internally with the postman who claimed the dog nipped him on the ankle causing a reflex reaction.

Royal Mail has apologised for the upset caused in a letter and point out that 33 of their delivery workers are injured by dogs every week.

The mother said: "My dog is terrified of going to the door and when the doorbell goes, he wets himself and is visibly shaking.

The Royal Mail has apologised for the upset caused
(

"My daughter answered the door for the delivery. I was outside hanging washing up and she ran in and told me what had happened. My daughter was very upset.

"She was crying her eyes out and she's not an emotional kid."

She said she made a formal complaint to Royal Mail.

The letter she was sent reads: "We wish to again express our regret and offer our apologies once more for the upset, especially to your young daughter.

"Royal Mail staff are family people, with cats, dogs and other pets and we fully appreciate what a huge part of a home they are.

"That said, 33 Royal Mail staff are attacked by dogs every week and a lot of our colleagues have seen small nips, through to life-changing injuries on friends at work.

"We work closely with our health and safety team to ensure our staff are fully aware of the dangers of loose animals.

"We employ an absolute AVOID policy, whereby mail is returned to the office for a safe attempt delivery should any loose animals or pets be looking to what they see as defending their family, or space."

The postie hands over the parcel on his deliveries
(

A Royal Mail spokesperson said in a statement: "Royal Mail treats all dog attacks on our postmen and postwomen very seriously.

"Our first priority as an employer is to ensure the welfare and safety of our people who provide a valuable service to our customers.

"The vast majority of dog owners are very responsible and keep their pets under control.

The Royal Mail worker swiftly left after the incident
(

"However, last year, there were 1,690 dog attacks on postmen and women in the UK – some resulting in life-changing injuries.

"We continue to appeal to dog owners and their families to help reduce the number of attacks, particularly at the door and in the garden.

"Customers who would like more information about how to prevent dog attacks when the postman visits their property, can visit our website at www.royalmail.com/dogawareness."