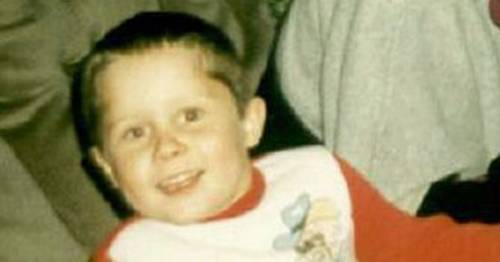 A murderer has been jailed for life for killing a six-year-old boy almost three decades ago.

James Watson, 41, lured little Rikki Neave to the woods near his home in Peterborough before killing him on November 28, 1994.

He throttled the boy from behind with a ligature or anorak collar, to fulfil a "morbid fantasy" he had told his mother about three days before.

Watson, then 13, stripped Rikki and posed his naked body in a star shape for sexual gratification, deliberately "exhibiting" him near a children's woodland den.

The monster was found guilty of murder earlier this year after an 11-week trial at the Old Bailey.

He was today sentenced to life with a minimum term of 15 years.

Watson (pictured) was 13 when he throttled Rikki to death
(

Rebecca today broke down as she addressed the Old Bailey during Watson's sentencing today.

Addressing the killer, but not using his name, she said: "After all these years of living your life … you finally get your comeuppance and Rikki Lee Harvey finally gets justice."

Paying tribute to her brother, she added: "Although I was the eldest, it wasn't like that as he would look after me.

"Losing Rikki was like losing the other half of me.

"I still wake up every day thinking it was a nightmare. I never had a brother to grow up with.

"Rikki is the one who is not here and lost his life, but the effect this had on me and my family is just never-ending."

She added: "I just cannot understand what happened or why.

"This has been so traumatic, not knowing what happened to him or why. Not only did I lose Rikki, but I lost my whole family.

"I miss him so much. All of our lives have been turned upside down and nothing has been the same since.

"After all these years, it is about time Rikki has justice."

Police searching for clues in Peterborough in 1994
(

Rikki's mum Ruth Neave was originally accused of killing him, however she was acquitted at a trial in 1996.

The mum-of-four was convicted of child cruelty.

Watson was only caught when his DNA was identified on the victim's clothes following a re-examination of the case two decades after Rikki's death.

He was originally interviewed by police in the days after the murder in Peterborough, but gave a false alibi.

She said: "I was only three when Rikki was murdered and I was removed from my family. After I entered the care system I suffered severe mental health issues.

"I remember Rikki feeding me, washing me and help me with my clothes.

"He has missed so much or our lives, happy times that we have had. I also wonder what he would be like if he was still here but, sadly, I will never know because he was taken from me."

Ms Orr looked at Watson in the dock at points.

Mum Ruth Neave, who was convicted of child cruelty following her trial, did not attend sentencing today, although her victim impact statement was read out in court.

The woodland where Rikki's body was found
(

“Rikki was the most beautiful person ever. I miss all of his cheekiness, his laughter," she said.

“Why would someone kill such a beautiful child? I know I smacked him when he was naughty, but I hated it. I could not tell him off without.”

“Yes I used to shout at him and swear, but that never killed him, did it?

“My Rikki was a little firecracker – I could not have wished for a better son, he was adorable. I love you with all my heart and soul, he was my soulmate.

“I had my children snatched out of my arms in the middle of the night because the police were so adamant that I had killed Rikki and would then kill my daughters.

“I feel dead inside, he was the only son I had. Rikki’s murder left a massive hole in our lives and in our hearts.

Rochelle Orr, one of Rikki's younger sisters, remembers her brother feeding and washing her
(

“I miss him so much that it feels like I have had my heart ripped out.”

Jennifer Dempster QC, defending Watson, said her client’s most substantial mitigation was his age at the time of the offence.

She also said there were “particularly sensitive matters” in Watson’s life – not aired in court – which made him vulnerable and he was taken into care in 1993 after being assaulted by his father.

She said: “The defendant himself was a victim at the hands of others.

“The defendant’s education and general childhood was affected by being let down by a variety of adults in his life who ought not to have done so.”

Ms Dempster added: “This was a young man – a young boy – who really had no stability in his life.”

She added that there was no evidence “in any way, shape or form” that Watson sexually assaulted Rikki.

Rikki's body was found the day after he went missing.

Watson had obsessed over newspaper coverage of the killing, copying front page stories at school.

Former Assistant Chief Constable for Beds, Cambs and Herts Police, Paul Fullwood, who spearheaded the new probe, previously said: “This trial happened as a result of our 2014/15 review and 2015 re-investigation.

"From the outset, we were determined to review all of the evidence available from the original case and understand what it told us about Rikki’s death and the person responsible for his murder.

“Unfortunately, some of the exhibits from the original case were damaged in a flood and others were given back to the family following the original trial and the new team were never able to find them.

"This would no longer happen in an unsolved murder case we now keep all materials until an investigation is solved.

“Thankfully we still had tapings from Rikki’s clothes which proved crucial in providing the team with key forensic evidence for this case.

“As a new team we can’t say why some evidence was not used originally but we know that this would not happen now and our re-investigation has resulted in the person responsible for Rikki’s death finally being found and dealt with.

In April, Watson, now 41, was found guilty of murder by a majority after an Old Bailey jury deliberated for 36 hours and 31 minutes.

The Old Bailey heard how Watson's sexual interest in younger boys was known to police, who interviewed him over an allegation that he molested a five-year-old in 1993.