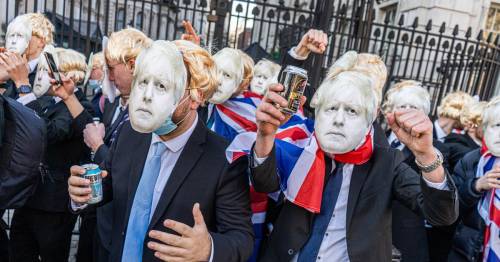 Revellers in Boris Johnson masks were filmed downing booze and chanting 'this is a work event' outside No10.

The group of around 100 people wore blonde wigs for their street 'rave' – mocking allegations of parties being held at Downing Street while the country was in a strict lockdown – with MPs going on to explain them as work meetings.

A crowd carrying Union Jack flags, beer bottles and wine bottles chanted "my name is Boris and this is a work event".

It's believed the event was organised by YouTuber JaackMaate, who shared images from the gathering on Twitter, saying: "We hired 100 Boris Johnson's and threw a party outside Downing Street."

It comes after excruciating New claims have emerged of two staff leaving dos at the same time in No10 on the night of Friday 16 April.

One No10 staffer was reportedly dispatched to the Co-Op on the Strand, 10 minutes’ walk away, to fill a suitcase with wine.

They would have wheeled it back through Trafalgar Square, where lockdown law banned Brits meeting in groups of more than six.

A source told the Mirror they slipped into No10 through a back entrance, using a keypad to get in away from watchful police.

Staff later spilled into the garden, which is shielded from view from Horse Guards Parade by high brick walls topped with security wire.

They tried a swing belonging to the PM’s one-year-old son. They reportedly broke it in the process.

Riotous staff were said to be saying goodbye to a photographer, at the same time as a separate leaving do for spin chief James Slack.

The Prime Minister’s former official spokesman, who left the Daily Mail to rise through the ranks to comms director at No10, gave a leaving speech elsewhere in the building, before the two parties allegedly merged.

"I wish to apologise unreservedly for the anger and hurt caused,” Mr Slack, now an executive at The Sun, said today.

A crowd carrying Union Jack flags, beer bottles and wine bottles chanted "my name is Boris and this is a work event"
(

He added: “This event should not have happened at the time that it did."

That’s something of an understatement.

The next day, the Queen sat alone at her husband’s funeral – one of the defining images of the pandemic.

Desperate to contain lockdown-weary Brits, Priti Patel had announced £800 fines for people who attend house parties – much higher than the £200 fine for attending most illegal gatherings. Organisers could be fined £10,000.

Four days before the boozy No10 bash, some rules were eased in ‘step 2’ of England’s roadmap.

But indoor social gatherings between different households were still illegal, and outdoors they were limited to the rule of six.

Non-essential shops, hairdressers and public buildings like libraries had all been shut until the week of the No10 bash.

Even people who met outdoors were warned not to hug, and to maintain two-metre social distancing where possible.

The allegations of parties held at No10 are now being investigated by Whitehall enforcer Sue Gray, a minister said today.

And the Met Police have indicated they will only investigate if Ms Gray finds evidence of criminality – which The Times reported she is unlikely to do.

Previous : Citi says Mexico consumer bank a ‘jewel,’ as it gears up to sell
Next : Prince Andrew’s fateful 30-minute talk with Queen as he lost all royal titles