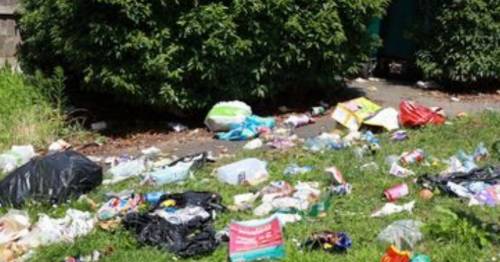 Residents have been left disgusted after being forced to live amongst their own rubbish.

It comes after bin men in the area have allegedly failed to collect their waste for weeks on end, reports Coventry Live.

The green space on their road, normally used by children to play in, is now filled to the brim with smelly rubbish that has spilled all over the place due to the over-filled bins.

Occupants of Tile Hill in Coventry say they cannot go near their communal areas any more because of broken glass on the floor, and excessive amounts of rubbish.

One local told CoventryLive the chaos has been affecting them for weeks.

He added that the mess has left them dealing with vermin including foxes, mice and rats.

"It's been like this for well over a month now. Nobody has seen bin men collecting waste or if they have, nothing is being done about the rubbish that's spilled onto the grass or rest of the communal area," the resident added.

"This is affecting everyone because there are children that normally play in that area but can't because of broken glass and rubbish. My step-children can't play outside either because of the waste and awful smell.

Since the rubbish has been left there, we are dealing with a lot more foxes, rats and mice than normal." The resident – who asked not to be named – said their rubbish has been building up since bin drivers in Coventry went on strike. "There has been a few reports made to [the] council but no action has yet been taken," he added.

Residents on a street in Coventry have been living with rubbish across their communal area for months, according to one person living there
(

The situation comes against the ongoing backdrop of industrial strife in the city over bins.

Industrial action by the city's bin drivers began in January amid a row over pay. Since then, the city council has called in private waste collectors Tom White in an effort to ensure bins in the city are still collected.

The strike is still dragging on, with both sides blaming the other for a failure to end the deadlock.

Yet despite the private waste arrangement, some complain rubbish in some areas is not being picked up.

Coventry City Council were approached for a comment but did not respond.

Previous : Russia’s rebranded McDonald’s sells 120,000 burgers on opening day – World News
Next : Residents near 20ft sinkhole might have to be evacuated from homes if it gets bigger