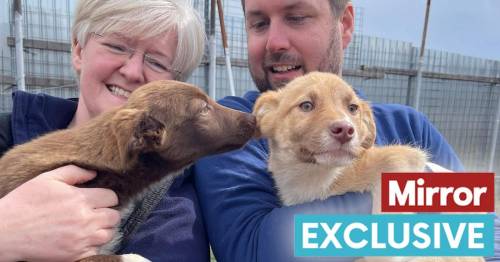 A charity that cares for hundreds of abandoned, ill and disabled dogs is pleading for help to save 800 pups from becoming homeless.

Romanian Rescue Appeal has given 3,000 street dogs safe homes since the UK-founded charity launched in 2015 – but now it is at imminent risk of closure.

Inflation rates in Romania have climbed by 8.5% since the pandemic hit, meaning the price of food, medicine, fuel and building materials is more than ever before.

The charity's dedicated team of volunteers needs to raise an enormous £25,000 to pay back the outstanding debts and keep the rescue afloat.

The charity takes in dogs that others won't
(

It is a lifeline for stray puppies in need
(

Mauro told The Mirror : "The pandemic was a killer. We have been using our own personal money to keep things afloat, but now we are desperate.

"If we can't raise enough to pay the bills, we will have to close and find somewhere to take all of the dogs or let them go back to the streets.

"It would be the greatest defeat of all. I refuse to hand them over to the public shelters where we saved them from."

In the last two years, the charity has borrowed money, tried to rehome more dogs, "begged" and worked with other rescues – but it has not been enough to tackle the rising debts.

Mauro broke down in tears talking about the possibility of saying goodbye to the dogs forever.

He explained: "It's heartbreaking. These dogs wouldn't be alive today if it weren't for our charity. They were injured, ill and disabled and nobody else would take them in.

It is on the brink of collapse
(

Hundreds of dogs will be made homeless
(

"We are pleading for help and we don't want to let these dogs down. They can be so loving and such good companions.

"We always want to be a lifeline for dogs in need."

The number of stray dogs continues to rise in Romania, meaning the charity is caring for more animals than ever before.

As well as taking these dogs off the streets, Romanian Rescue Appeal works with authorities to carry out neutering campaigns and deliver educational programmes.

It's heartbreaking for the volunteers
(

Nobody wants to say goodbye
(

At the moment, most of the charity's dogs are being cared for in third-party shelters across Romania.

Mauro has plans in place to build a 'flagship' centre, which would reduce their annual costs by a significant 10%.

The charity is hoping to raise as much money as possible to cover the cost of debts and put them in a safer, more stable place for the future.

If you would like to donate to the Romanian Rescue Appeal fundraiser, please visit the GoFundMe page.

Previous : When is Father’s Day 2022? UK and worldwide dates, and why we celebrate it
Next : Tom Brady to join Fox Sports as lead NFL analyst when playing career ends