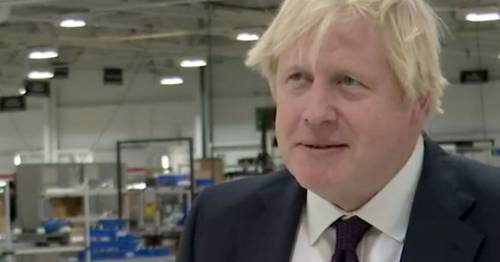 Boris Johnson was asked if "everything is okay" after he lost his notes and appeared confused in a speech to business leaders.

The Prime Minister was expected to confirm announcements on new regulations for housing developers in England to install electric vehicle charging points.

But instead, the PM spent just over 20 seconds muttering "forgive me" three times and "blast it" as he lost his place.

Business leaders sitting in front of him at the annual Confederation for British Industry conference appeared unsure how to react.

And as the embarrassment continued, the PM appeared to try and cover up his confusion, demanding to know why business leaders hadn't visited Peppa Pig World in South Shields, which he visited yesterday.

After the bizarre speech, an ITV asked him, "is everything okay" as he lost his notes and his place during the speech.

But Mr Johnson did not confirm if everything was okay, instead he said the speech "went over well".

"I think that people got the vast majority of the points that I wanted to make and I thought it went over well," he told the reporter.

Shadow Chancellor Rachel Reeves said: "The PM's shambolic CBI speech shows how unseriously he takes British business, and how he lacks any plan for growth."

And Lib Dem leader Ed Davey said: “Businesses are crying out for clarity. Instead, all they got was Boris Johnson rambling on about Peppa Pig.

“It is a perfect metaphor for Johnson’s chaotic, incompetent Government as it trashes our economy, but it is not worthy of a British Prime Minister.

"The Prime Minister famously said he was going to “f” business – the least he could do is to deliver a decent f-ing speech.”

Mr Johnson's surprise reference to Peppa Pig came shortly after he regained his place in his speech.

He said: "Yesterday I went, as we all must, to Peppa Pig World.

James Mancey, operations director at Paultons Park, where Peppa Pig World is based, said the attraction was “delighted” Mr Johnson attended on Sunday.

The operations director went further to add: “The fact that Mr Johnson has chosen to speak at length about his visit during today’s CBI conference, positively endorsing the creativity and innovation showcased by Peppa Pig World and encouraging others to visit, is testament to the hard work of everyone at Paultons Park who create the wonderful experience our millions of guests enjoy each year.”

But North East businessman Richard Swart, who is global sales and quality director at County Durham manufacturer Berger Group and chairman of the Advanced Manufacturing Forum, told the Mirror the speech was "catastrophic".

Previous : Keir Starmer vows Labour is ‘party of business’ as he sets out new Brexit plan
Next : Joseph Tisiga wins inaugural Yukon Prize for the arts