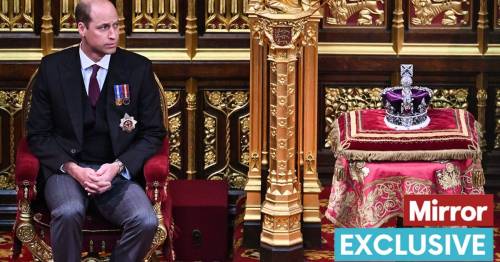 Prince William appeared "sad and regretful" as he made his debut appearance at the State Opening of Parliament today, a body language expert has said.

William was at the important state event alongside his father Prince Charles and his stepmother the Duchess of Cornwall.

It had been announced just last night that William would be attending the ceremony after the Queen reluctantly pulled out on the advice of royal doctors due to her continued mobility problems.

During the event, William took his place in the procession behind the Imperial State Crown and sat at the side of Charles, who had the responsibility to read the Queen's speech.

Prince William at the State Opening of Parliament today
(

And according to body language expert Judi James, William almost became the "invisible man" behind his father and noted his expression suggesting "sadness and regret".

She told the Mirror: "William was almost the invisible man here. Tugging at his waistcoat on arrival he then appeared to keep his hands clasped in the fig-leaf position in front of his torso for the entire event, only placing them on his lap once he sat down.

"He walked with his hands clasped like this, suggesting a lowering of his own status and presence. His facial expression suggested sadness and regret.

"His polite smiles were down-turned with the lips sucked in to emphasise the idea of sadness and his frown and down-turned eyes gave a very sombre look to his body language."

William walks past the Household Cavalry in the Houses of Parliament
(

Meanwhile, Judi also noted that Charles also showed "undeniable signs of nerves" as he stepped in for the Queen at the State Opening of Parliament today.

For the first time ever, Charles delivered the Queen's speech after his mother pulled out of attending the event last night.

The 73-year-old prince sat not on the sovereign’s throne, which had been removed, but on the consort’s throne, which used to be occupied by his father, the Duke of Edinburgh, and which Charles has used in recent years.

A space remained next to him, where the Queen’s missing throne is usually located, under the opulent canopy, with the monarch’s Imperial State Crown in front on a velvet cushion.

And according to Judi, Charles appeared "pre-occupied" with the crown before his nerves really started to show.

She told the Mirror: "Of course, the most powerful presence at this State Opening of Parliament was always going to be the missing one.

"Even with the Queen’s throne removed the gap left looked poignant and as Charles lowered himself onto what is called the Consort Throne and William squashed himself onto the smaller throne a few steps down, Charles appeared preoccupied with the crown that sat in front of him, gazing at it for several moments before he was given the speech to read.

"Charles arrived using body language signals to suggest a desire to imply control and even leadership.

"There were some directional steering gestures to his wife and Black Rod on the way into the building and even some smiles of greeting, but he became more sombre and there were some undeniable signs of nerves as he took the walk to the throne room.

"He took a deep breath on the way in and performed a jaw-jut and sideways wobble as though bracing himself.

"As he arrived at the archway to the throne rooms his head suddenly jerked up to either look at the arch or the throne.

"With Camilla’s left hand showing anxiety signals, tapping at the arm of her throne, and her feet making jittery movements on the floor, Charles’s levels of nervousness became more obvious as his hands shook while he held and read the notes of the Queen’s speech, making the pages flap as he held and turned them."

Previous : Kate Middleton wears bee earrings in tribute to Manchester victims as she opens memorial
Next : ‘I had awful thoughts of harming my baby. I didn’t want to be near knives’