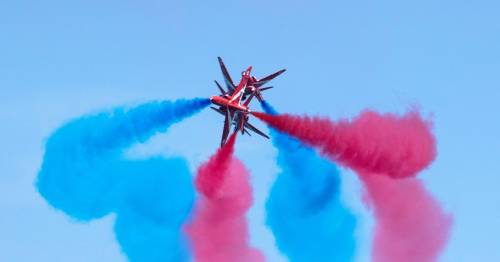 Red Arrows to display with 7 aircraft not 9 – but where can you see them this summer?

The Red Arrows have started their training for summer 2022 and Brits will be able to watch their "breath-taking flying" at locations across the UK.

The Royal Air Force announced on Twitter that its Aerobatic Team – commonly known as The Red Arrows – have started their training ahead of the summer season.

The squadron's most momentous appearance is set for Thursday June 2, when they will join 70 aircraft from the RAF, Armed Forces and the Royal Navy as they soar over Buckingham Palace to kick off the Queen's Platinum Jubilee celebrations.

The Queen is expected to watch the flypast with other working members of the Royal Family.

The MoD said more than 70 aircraft, including the Red Arrows and aircraft used by the UK Armed Forces on operations around the world, would take part in the aerial event.

It will take six minutes to fly over the crowds and is expected to include more than three times the number of aircraft which took part in the Queen's last birthday parade flypast in central London in 2019.

The display will include helicopters from the Royal Navy and the Army and RAF aircraft recently seen responding to events in Kabul and Ukraine and the coronavirus pandemic.

The Red Arrows will be making several more appearances the length and breadth of Britain this summer, with some minor changes to previous years.

The Red Arrows will be among 70 aircraft from the RAF, Armed Forces and Royal Navy flying past Buckingham Palace to salute The Queen for her Platinum Jubilee on June 2
(

According to an RAF press release, the Arrows will fly in a "seven-aircraft formation, rather than nine" this year because two members of the crew have moved to other positions in the air force.

The seven-aircraft display isn't unheard of and is used "when a situation dictates, such as illness or aircraft availability".

But despite having two less pilots, the spectacle will be no less impressive, the RAF adds.

The statement reads: "The 2022 display will feature all of the same breath-taking flying, dynamic teamwork and world-class precision the millions watching always expect – combining crowd-favourite manoeuvres with new shapes.

"All of the team are hard at work, perfecting and polishing this display ahead of the season beginning in late May.

"We look forward to displaying the best of British in what promises to be the team’s busiest campaign since 2018."

Find the dates and times of Red Arrow appearances below: