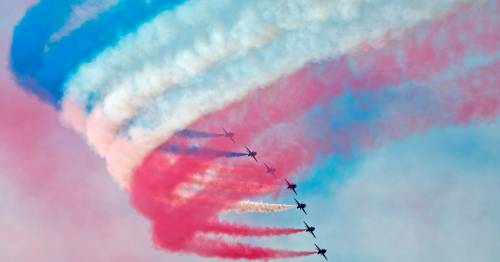 Brits will be able to see the incredible Red Arrows fly past them over the course of this week.

The diving and darting shiny red icons will be visible blazing across the skies today (June 23) as they make their way to the Goodwood Festival of Speed.

More exciting events over the course of the weekend will see the Red Arrows soar across southern England, away from their usual base at Scampton in Lincolnshire.

Today the route takes them across England on the way to Goodwood in Chichester, West Sussex.

Only recently the acrobatic air wonders dazzled Brits with their performance in the flypast for the Queen's Platinum Jubilee.

With such a busy schedule ahead, plenty of Brits will be able to see them as the highly-trained pilots in their famous Hawk T1A aircraft fly over close to their heads.

So where can you see the Red Arrows?

The Red Arrows wowed Brits during the jubilee celebrations
(

The Red Arrows have a busy schedule ahead of them and will today fly over from Scampton to Farnborough. Here's when to catch them.

The Festival of Speed Display:

Transit from Farnborough to Scampton:

The full schedule is as follows:

For Saturday, there will also be "ground teams & displays for Armed Forces’ Day events" in Scarborough and Cleethorpes, as well as flypasts at Whitby and Filey.

On Sunday June 26, there will be a third display at Goodwood, followed by one at Weston Air Festival.

Where can I see the Red Arrows?

The Red Arrows will be at some major events, including the British Grand Prix
(

The Red Arrows are taking part in a number of events in 2022, including the Goodwood Festival of Speed and the Royal International Air Tattoo.

The latest display of the "speed, agility and precision" the RAF describe will show yet another amazing display after 5,000 in 57 countries over the course of 58 years.

They will also resume their regular spot this year with fantastic displays of aerial close-calls at the British Grand Prix at Silverstone, July 3.

Military Airshows has a full list of Red Arrows air shows for the rest of the year from July.

Previous : Humiliation for Vladimir Putin as missile shot at Ukraine misfires dramatically – World News
Next : Schoolboy, 14, collapses and dies in class 30 minutes after telling gran ‘I love you’