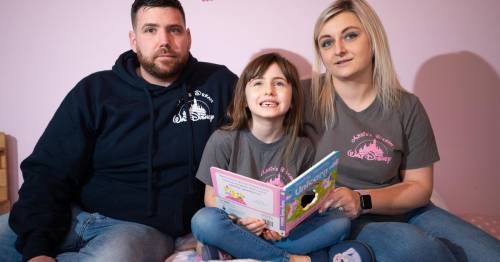 The heartbroken parents of a five-year-old girl with dementia sing to their daughter every night in the hopes she never forgets them.

Abbie Cresswell, five, has a horrific rare genetic condition which causes dementia in children – and has no known cure.

The little girl, who loves to dance and sing to her favourite songs, will be lucky to reach her 20s, the Daily Record reports.

The cruel disease – so rare that just four kids are diagnosed in the UK each year – has already started to blind her.

In "weeks, months or years", she won't be able to walk, talk or feed herself.

With the only known treatment, a US-based stem cell procedure, costing £1.2million – Abbie's family are focused on giving her the happiest memories they can give.

And in a desperate attempt to forge lasting memories Danielle, 30, and husband Ben Cresswell, 33, sing her Dancing in the Sky, a tune by Canadian singers Dani and Lizzi, every night.

The parents say it's tough watching their daughter grow up, oblivious to what lays in store, and knowing the looming suffering that waits.

“You wouldn’t know to look at her – she still plays with her friends, loves playing with her Barbies and babies and goes to street dance every Friday.

"It’s horrible that there is something this cruel that will take everything away from her. The only thing this disease doesn’t take away from you is your hearing.”

So, in a loving bid to ensure their daughter never forgets them, Danielle and husband Ben, 33, sing Dancing In The Sky, released in 2016 by Canadian singers Dani and Lizzi, to Abbie every night in the hope she can retain the memory.

They sing to her every night, hoping she won't forget them

Mrs Cresswell, from Inverboyndie, Aberdeenshire, said: “Hopefully by drumming it in she will always remember the song and know who we are when we come up the stairs singing it.

“We sing the same song every night and she knows all the words. We have the same song for me and her dad so, when the time comes, she will still know it’s mum or dad who’s speaking to her.”

Her grandmothers also have songs to help Abbie remember them – You Are My Sunshine and A Night to Remember.

The tune they sing is Dancing In The Sky, released in 2016 by Canadian singers Dani and Lizzi

Abbie has juvenile Batten disease, a neurodegenerative disorder so rare that fewer than four children are diagnosed with it every year in the UK.

There are 14 different types of the fatal condition and last year the Scottish Government approved the use of a drug that can help slow the progression of those with the infantile CNL2 variant.

But Mrs Cresswell, a carer, said: “Abbie has CNL3 and the only treatment available costs $1.7million in America.

"How does anyone raise that kind of money? I sometimes think I can understand because it’s so rare but then I think, why don’t we try something here if it could save someone so young?”

The only treatment costs a staggering £1.2million

The family say despite the financial mountain they face, they won't give up

But she stressed: “We’ll never give up hope. I just hope Abbie doesn’t progress too quickly, so if something does come out, it will be able to help her.”

The family, including Abbie’s sister Kacey, 13, and brother Scott, 11, are now focused on making as many memories as they can while she is able.

The princess-daft youngster, who turns six in January, has already enjoyed a trip to Disneyland Paris this year, where she spent fun-filled days dressed as Elsa from Frozen.

Now her dream to travel to Walt Disney World in Florida is about to come true following a fundraising appeal by a family member which generated more than £22,500. The money will also help buy sensory toys and equipment for Abbie when needed.

Juvenile Batten disease, which Abbie suffers from, is picked up between the ages of four and seven.

Faulty genes cause waste to build up in cells, which eventually leads to blindness, loss of mobility and speech, seizures and dementia.

The only treatment the parents know of, a stem cell transplant, is in the US and it costs a staggering £1.2million.