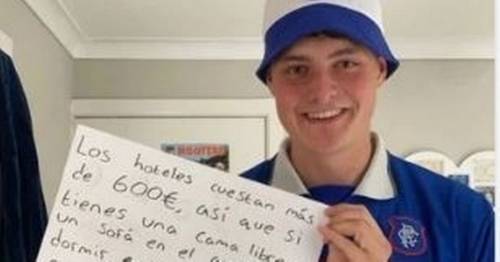 A TikToker has come up with an ingenious plan to find a room for the Europa League final using a Tinder profile.

He set up a page on the dating site in desperate attempt to find a Spanish host after travelling overseas to watch his football heroes Rangers play Eintracht Frankfurt in the Europa League final.

Connor was desperate to find a place to stay in Seville on Wednesday and wanted to find a room.

He shared a number of photos of himself wearing a Rangers strip and hat with a Love Actually-style message on sheets of paper.

The Daily Record reports his message, which was written in Spanish, it read: "Hello Madam, my name is Connor and I’m a Rangers fan in Seville for the final.

"I am desperately looking for a place to stay. Hotels cost more than 600 euros so if you have a free bed or a sofa I can sleep on, it would be a big help.

"I’d be prepared to pay for this service. Thank you. Come on Rangers!"

Connor, 23, went viral on Twitter after his his efforts to find a bed for the night and one Tinder user hoped to help him.

They shared shared his profile online, with the caption "tinder >>> airbnb".

He added that he was waiting for Connor to respond to his message and urged anyone who knew him to inform him he had a new like.

The post has racked up over 35,000 likes as users were left in stitches.

One person described Connor as a "hero" while another said "this wins tbh".

One user wrote: "Please someone take him he looks super nice."

And another posted: "What a guy, I hope he gets lodging."

In March another Tinder user attracted attention on the site when men stole his pictures to win dates.

Rangers are through to the Europa League final
(

The Mirror told how Lewis Croker, 25, first hit TV screens last year, when he was invited to take part in reality TV show Ready To Mingle with his girlfriend, Shannon, 25.

But his TV debut have sparked an obsession, not just from women, but from ‘catfish’ men who are stealing his pictures in an attempt to win female attention.

Happily-smitten Lewis initially thought it was funny when a friend sent him a link to an Instagram account pretending to be him under the name ‘Lewis Millard’, a few months ago.

But since then, the fireman from Bridgwater, Somerset, has noticed accounts pop up on Tiktok, Snapchat and dating app Tinder – some of which have even tried to organise dates with his girlfriend’s mates.

Previous : YouTube boxer pleads with ref to stop fight after pummelling rival in ring
Next : Vladimir Putin is backed into corner and prepared to use nuclear weapons, expert claims – World News