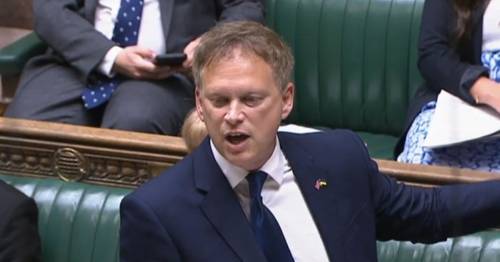 Union-bashing Tory ministers were accused of a “dereliction of duty” today as Labour said they and rail workers’ leaders had not met for three months.

Boris Johnson blasted “union barons” who will “add to people’s costs” ahead of a walkout at 13 train companies and Network Rail on June 21, 23 and 25.

And Transport Secretary Grant Shapps led a heated Commons debate, saying Labour “don't seem to care about the fact that anyone that is trying to get anywhere will lose pay”.

But Labour claimed the last meeting between unions and transport ministers was on March 8, when Rail Minister Wendy Morton discussed workforce reform.

In a letter to Mr Shapps, Shadow Transport Secretary Louise Haigh wrote: “It is frankly extraordinary that it appears you have yet to hold any talks on the biggest rail dispute in a generation.

"This is a dereliction of duty and an insult to the hundreds of thousands of passengers who depend on this despite being resolved.

“Instead of showing some leadership, doing your job and sorting this dispute out, you would rather provoke this dispute rather than resolve.”

Mr Lynch said the Treasury is "calling the shots" and not allowing rail employers to reach a negotiated settlement.

Labour's Louise Haigh said: "This is a dereliction of duty and an insult to the hundreds of thousands of passengers who depend on this despite being resolved"
(

Mr Shapps hit back that Mr Lynch had said “just a month ago said that he would not meet with a Tory Government”.

Boris Johnson’s spokesman added: “We are not the employer here, it id for the union to negotiate with their employees. We cannot intervene in negotiations between rail companies and the unions.”

Downing Street denied trying to use the issue to force a “wedge” in Labour and among swing voters after Boris Johnson demanded Keir Starmer “oppose Labour’s rail strikes”.

The RMT has not been affiliated to Labour for two decades. Keir Starmer hit back at PMQs : "I don't want the strikes to go ahead. He does so he can feed on the division."

In a shouty Commons debate, Transport Secretary Grant Shapps said some Labour MPs had received donations from the RMT.

“Even if you take the median within the rail sector itself it's £44,000, significantly above the sums of money which are paid, median average in this country.”

Keir Starmer’s spokesman said: “We think that rather than having a debate in Parliament this afternoon ministers should be doing their job, which is to ensure the strikes don't go ahead.”

He added: “It's clear that the PM has been looking to use a number of these issues for divisive political reasons rather than focusing on the solutions.

"The fact of the matter is that the government has the ability to stop these strikes going ahead if it wants to and it is choosing not to do so."

Previous : ‘Plan to deport asylum seekers to Rwanda was bound to end in farce’ – Eva Simpson
Next : Dogs can get sunburn and need to wear SPF just like humans, vet says