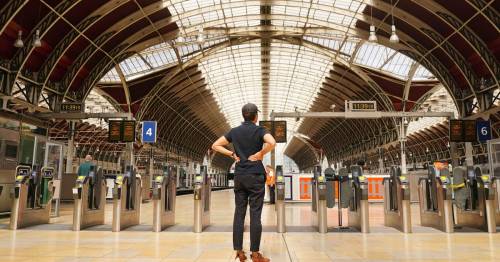 Brits are set for another day of travel chaos caused by the train strike with only 60% of services operating while talks continue with unions over workers' pay and conditions.

Fewer than one in five trains ran on Tuesday after members of the Rail, Maritime and Transport union (RMT) on Network Rail (NR) and 13 train operators staged the first of three walkouts, with strikes set to follow on Thursday and Saturday.

The joint action caused travel chaos across the UK, with journeys taking longer and roads packed with traffic as people switched to cars or buses to get to work.

The chaos will continue on Wednesday, with only 60% of trains running, mainly due to a delay to the start of services as signallers and control room staff are not doing overnight shifts.

The RMT will meet with NR and the train companies today in another attempt to break the deadlock.

RMT general secretary Mick Lynch said the turnout at picket lines on Tuesday was “fantastic” and had exceeded expectations in the union’s campaign for job security, defending conditions and a decent pay rise.

He said: “Our members will continue the campaign and have shown outstanding unity in the pursuit of a settlement to this dispute.

“RMT members are leading the way for all workers in this country who are sick and tired of having their pay and conditions slashed by a mixture of big business profits and Government policy.

“Now is the time to stand up and fight for every single railway worker in this dispute that we will win.”

A Department for Transport spokesperson said: “These are desperately needed reforms that modernise the railway and put it on a sustainable footing for passengers and taxpayers.

“Unions have shut down big parts of the rail network, hitting local businesses and unfairly cutting people off from hospitals, schools and work.

“However, early data shows that unlike in the past many people now have the opportunity to work from home, so we haven’t [seen] a rush to the roads, as traffic has instead gone online, which means the unions aren’t having the overall impact they might have hoped.”

The union has been asked by Network Rail to attend formal consultation talks next month on introducing “modern working practices”.

He added: “We expect this will reduce roles by around 1,800, the vast majority of which will be lost through voluntary severance and natural wastage.”

A picket line at Newcastle train station on Tuesday
(

Most adults believe the rail strikes are justified, according to an opinion poll.

A survey of over 2,300 people by Savanta ComRes showed that 58% said the industrial action was justified.

Three out of five of those polled poll said they are generally supportive of the principle of industrial action, while just 35% were generally opposed.

Prime Minister Boris Johnson put the public on notice for further strike action as Downing Street said it would “not give in” to demands from the rail unions.

Mr Johnson warned commuters they must be ready to “stay the course” and urged rail bosses and unions to agree on a modernisation package to safeguard the future of the industry.