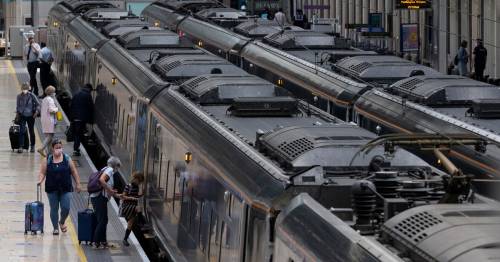 Rail strike: How much are train workers paid and why do the figures differ?

The largest rail strike in modern history will go ahead from tomorrow.

It is understood at least 40,000 Rail, Maritime and Transport (RMT) union members are walking out after talks broke down between Network Rail, train operators and London Underground.

The RMT said members are striking over job cuts and below-inflation pay rises, with the Government slashing funding for National Rail and Transport for London.

On Tuesday, there will be strikes across the London Underground
(

General secretary Mick Lynch said: “Despite the best efforts of our negotiators no viable settlements to the disputes have been created.”

However, the pay figures that have been reported vary significantly.

While the debate has covered the salary of the train drivers, the strike is over pay for rail workers in all other roles across the country.

How much are the drivers paid?

In Parliament on June 15, Transport Secretary Grant Shapps responded to a suggestion from Jeremy Corbyn that pay was inadequate and said that the median salary for a train driver is £59,000, compared to £31,000 for a nurse.

This means that if all train drivers were lined up in order of their pay, the person in the middle would represent the median salary.

The difficulty with using this figure for train drivers in regards to strikes is that drivers are represented by their own union Aslef – of which 96% of drivers in England, Scotland and Wales are members.

The strikes over pay cover more roles than just the drivers.

Aslef will not be taking part in the national strike, but have their own taking place at the same time, with drivers at Greater Anglia striking on June 23.

A strike on Hull Trains that was planned for June 26 has been cancelled.

Aslef is also balloting for action on other lines.

What about the salary for rail workers?

The Department of Transport said they arrived at the figure by adding median figures from ONS for categories of workers and then dividing by four.

ONS figures show that rail travel assistants, who include ticket collectors, guards and information staff, have a median salary of £33,310.

Rail construction and maintenance operatives, who lay and repair the tracks, have a median salary of £34,998.

Rail transport operatives, who include the signallers and drivers' assistants, have a median salary of £48,750.

While train and tram drivers have a median salary of £59,189.

However, based on ONS figures there is a fifth category – the rail and following stock builders.

They build and repair engines and carriages and have a median salary of £46,753.

What does the RMT Union say?

The RMT union says the figures used by the Government are too high because it includes train drivers – who are mostly represented by a different union.

Furthermore, it adds the figures do not include other employees like station cleaners who are not categorised in official figures as rail workers.

RMT says it you take the £44,000 figure and exclude the drivers and include cleaning staff then the median salary is £33,000.

It says that figure better reflects the average pay of those going on strike.

When the BBC used the same figures and excluded drivers they got a figure of £37,500.