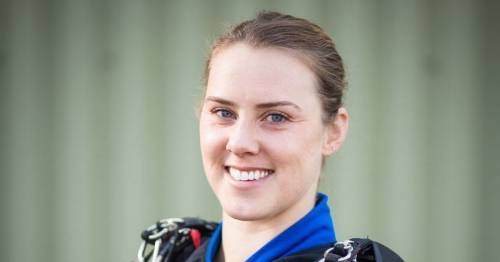 Tributes have poured in for an RAF instructor who died when her parachute reportedly failed to open during a training exercise.

It has been suggested that may have been an issue with a device that helps the parachute to open during a jump.

An inquest into Ms Fisk's death was opened on Wednesday, with a full hearing scheduled for February next year.

In a statement issued through the RAF, her family said: "It is with great sadness that we mourn the death of our dear daughter, Rachel.

RAF Weston-on-the-Green is located near Bicester, in Oxfordshire
(


"She lived her life with joy and thoughtfulness for others and loved the career she had chosen. Rachel will be missed by so many."

The RAF said Ms Fisk was born in Nuneaton, Warwickshire in 1989.

A strong interest in athletics as a child then led her to the military, taking her first role as a Physical Training Instructor in 2011.

A statement said: "She initially served at RAF Wittering and RAF College Cranwell, before being selected for instructional duties at the No 1. Parachute Training School, in RAF Brize Norton.

"Here, Rachel learned to instruct and deliver parachute training for the Armed Forces, feeding her passion for sports and developing her career which she loved.

"In 2020, she then moved to deliver Joint Service Adventurous Training at RAF Weston-on-the-Green.

"Rachel was a selfless individual, who was eager to volunteer and reassure those around her.

"She naturally loved her career and not only worked with professionalism and diligence, but also fun and enthusiasm spurred by her passion for what she did.

"Rachel was a valued member of the team she worked with and esteemed by those she trained.

"Not only was Rachel known for her infectious smile and bubbly personality, but she could also make a cracking cup of tea.

"She will be deeply missed by her RAF Colleagues, and following are some heartfelt tributes from those who had the pleasure of working with Rachel."

According to MailOnline, sources have said there may have been issues with Ms Fisk's Automatic Activation Device (AAD) during a training assignment, rather than a military exercise.

This is supposed to ensure a parachute opens once the jumper reaches a low altitude.

An insider said: "Sometimes jumpers rely on an AAD to inform them when they have reached a pre-selected altitude to deploy their parachute.

"The investigation will seek to confirm whether or not the AAD was effective in this circumstance."

It is thought that the victim and others had jumped from a light aircraft at an altitude exceeding 12,000ft.

Senior coroner for Oxfordshire, Darren Salter, said that Ms Fisk had been found unresponsive in a field following a parachute jump "during which it appears her parachute failed to open", according to the Oxford Mail.

She died from multiple injuries, it was said.