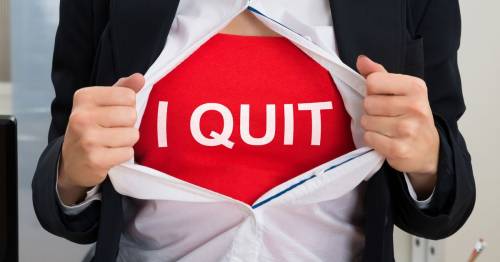 ‘Quitting job in blaze of glory might feel good, but it’s not worth ruining career’ – Victoria McLean

The so-called Great Resignation is showing no signs of slowing down – in fact, it seems to be gathering steam.

Millions of people are quitting their jobs after careful consideration but many, like the bartender who quit in a spectacular fashion (and who subsequently went viral) after being told he couldn’t get drunk in his own time, are making impulse decisions.

Some are leaving jobs they don’t enjoy because they know there are so many open positions out there at the moment – a UK record high of 1.1 million in the three months to September 2021.

And often the decision to quit is coming from a place of truth. I know employees nowadays are generally much more aware of their rights and they are increasingly becoming more assertive in ensuring employers treat them fairly.

Take Whitney Wolfe Herd, co-founder of dating and networking app Bumble. The youngest woman ever to take a company public and currently the world’s youngest-ever female self-made billionaire, she was also VP of marketing at Tinder (and the alleged brains behind the dating app). However, she resigned her position due to sexual harassment and discrimination and filed a lawsuit against Tinder.

Have you ever quit your job on impulse? Have your say in the comments below

The bartender responded by quitting – then went viral for his replies

While that might be an extreme and serious example, in my time at City CV I’ve known a number of senior level executives who have made the decision to leave their jobs too quickly (some might even say rather rashly). There was the operations director who quit in a hissy fit when he couldn’t deal with how far the kitchen was from his office, and I'll never forget the UK-based sales manager for Asia who, it turned out, really didn’t like to travel.

But that doesn’t mean you should burn bridges. Quitting dramatically on impulse may feel good at the time, but it has consequences. There’s a difference between standing up for your rights and taking it too far. Considering the impact your decision may have on your future career – as well as anyone who depends on you financially – is well worth taking the time to mull over.

If you feel like your employer or your job isn’t up to scratch, there are things you can try to improve your position before you end up leaving in a blaze of (short-lived) glory.

Firstly, it’s important to communicate. Does your boss even know that you’re considering leaving? Talking this through may mean they can implement some changes and turn things around.

Think about the pros and cons of quitting. Are there more pros or cons to staying and trying to improve your current situation?

Most importantly, while it’s great to be honest, it’s important to treat everyone – your boss, your colleagues or your own team – with respect.

Bad-mouthing anyone isn’t a great look, and does nothing for your future employment prospects, particularly in our social media age when word gets around so quickly. Plus, you can probably forget that reference…

Victoria McLean is the CEO of career consultancy City CV

Previous : Truth Social could provide Trump with infusion of cash — but critics are concerned about its content
Next : Man, 38, wanted over murdering his mum 19 years ago found dead in Spain