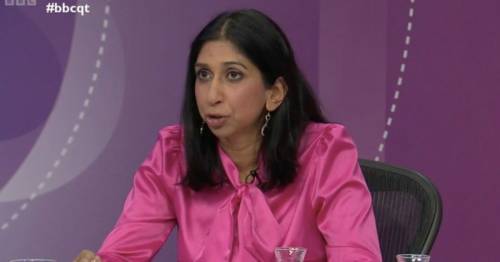 The Attorney General received howls of laughter from the Question Time audience after claiming that a single mum was better off now than a year ago thanks to the government’s aid packages.

Families have been hit hard by rising prices in the cost of living crisis which has left some Brits having to make the choice of whether to heat their homes or feed their kids.

Earlier this month the Bank of England warned Britain is careering towards recession with the bleakest economic outlook since the 1980s.

And on BBC ’s Question Time, the audience broke into fits of laughter when the Government’s chief legal advisor Suella Braverman claimed that government support is making some people better off than last year.

“No one is going to sugar coat the reality that times are tough,” she started.

The Question Time audience heckled the Attorney General over her comments
(

“Everyone is facing challenges when it comes to the cost of living, food prices are going up, energy bills are rising, that’s because of a variety of factors, inflation is rising not just in this country.

“In the US and the EU they are seeing similar patterns and we are also dealing with the aftermath of Covid and the huge amount of expenditure that we put in rightly to support the country through those difficult times.”

But asked by presenter Fiona Bruce when is the right time for the government to help out, she said it already had.

Fiona Bruce questioned the Attorney General over her figures
(

“These things all add up and thousands of pounds can be saved by the average family, a single mother on the national living wage, with two children, who is renting will actually be £1,600 better off this year compared to last year because of these cumulative changes.”

At this point there were jeers and comments made in the audience.

“Can I just finish, can I just finish,” said the Attorney General and a surprised looking Ms Bruce said, on the claims of people being better off: “Even with inflation running up to 10%?”

But Ms Braverman carried on: “The reality is that we are taking it into consideration inflation, these changes."

Ms Bruce said: "Hold on people are laughing when you say that Suella. I just wonder what your response is?"

Ms Braverman replied: "The reality is that there are a massive package of measures designed to help those on the lowest incomes so that they can get through these difficult times. Would I love to do more, of course I would."

There were more heckles from the crowd as Ms Braverman continued.

"I’m a conservative because I want to keep more of your money in your pockets not the governments," said the Attorney General, to more general laughing.

And sat beside her economist Miatta Fahnbulleh was far from satisfied with the claim.

"You are literally making numbers up," she said.

"When you top up all the measures that the government has put in place families are still on average £1,100 worse off so your numbers are literally made up."

Previous : Lewis Hamilton slammed for being “too preoccupied with nonsense” amid Mercedes woes
Next : Car insurance costs to fall £50 as Brexit law which allowed lawnmower claims is axed