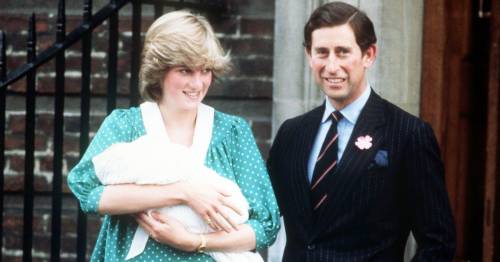 The Queen is never short of one-liners, quick responses, and cheeky comments, and her wicked sense of humour allows her to connect with members of the public.

But one of her most famous jokes wasn't the most flattering to her eldest son, Prince William, when he welcomed his first son, William.

While you would imagine that a grandmother would be full of nothing but joy at the new addition to her family, Her Majesty couldn't help but pull a few jokes.

Princess Diana gave birth to the future king, who turns 40 next week, was at St Mary's Hospital back in 1982.

Following the birth, new father Prince Charles was clearly besotted with his son and wrote to his second cousin, The Countess Mountbatten of Burma. He reportedly penned: "The arrival of our small son has been an astonishing experience and one that has meant more to me than I ever could have imagined.

"I am so thankful I was beside Diana's bedside the whole time because I felt as though I'd shared deeply in the process of birth and as a result was rewarded by seeing a small creature who belonged to us even though he seemed to belong to everyone else as well."

But it seems not everyone in the family was feeling as sentimental as the new father.

When the Queen finally got to meet her new heir, she said: “Thank heavens he hasn’t ears like his father,” reports Marie Claire.

The Prince of Wales has become well-renowned for his ears and has been cruelly taunted for many years. While the commentary is hugely unfair, his famous ears have become part of Prince Charles’s iconic image.

Josh O’Connor, the actor who played Charles in seasons three and four of Netflix’s The Crown, has even expressed his thoughts on the prince’s notable characteristic.

He said: “When I was at school, I was embarrassed by them and I wanted to pin them back. Now it’s like, ‘Thank God I didn’t’. Hopefully I would have been considered regardless but it helped and, the way I see it, it saved The Crown production on some prosthetics!”

These wise cracks after a new baby has been born are nothing new as the monarch also had quite the reaction when she was asked about Prince George's impending arrival back in 2013.

While visiting the Lake District days before her great-grandson arrived, the monarch met a group of students who eagerly asked her what gender she hoped the new baby would be.

True to form, Her Majesty had the best answer. She was heard to say: “I don’t think I mind. I would very much like it to arrive. I’m going on holiday.”

The late Duke of Edinburgh also had quite the reaction when he met his first son, Prince Charles, for the first time.

According to a Netflix documentary, the late Duke of Edinburgh met his newborn son and hilariously proclaimed that he looked like a "plum pudding".

The Duke of Cambridge will celebrate his 40th birthday in a few days time and it's thought that he's working on a project to commemorate his 40th year. Earlier this month, William was spotted selling The Big Issue on Rochester Row in Westminster to support homelessness charities.

The Duke has been working to promote the cause for many years ever since his mother, Diana, Princess of Wales, took him to meet rough sleepers in London when he was very young.

He still is an active supporter of the charity Centrepoint and became their patron back in 2005.