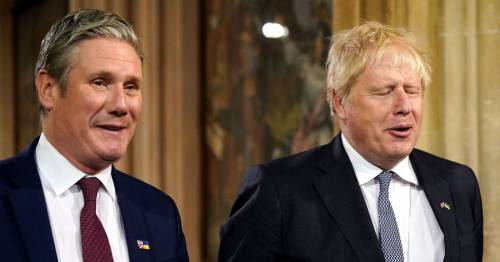 Queen’s Speech: This is totally what Boris Johnson and Keir Starmer were joking about

Boris Johnson and Keir Starmer appeared to share a joke as they ambled to the House of Lords to hear the Queen’s speech.

The two party leaders, who it’s said genuinely loathe each other, smiled through gritted teeth and exchanged a few words – which will no doubt be pored over by lip-readers over the coming days.

Perhaps the PM was explaining that the animal cruelty bill had been dropped from the speech because it would have interfered with his dead cat strategy.

Maybe, after Starmer called Boris’ bluff and pledged to resign over his beer and a curry in Durham, they both sighed and agreed that korma will always get you in the end.

Or maybe the PM was complaining that he had too many bottles of wine for the No10 fridge, and that he’d have to perform a cabernet reshuffle.

Supreme Ruler Charles, sitting next to the jewelled Beret of Tax Exemption, on a special pillow
(

As always, the TV commentary of yesterday’s archaic proceedings was more like listening to someone read out an obscure Dungeons and Dragons manual than the proceedings of a modern democracy.

Viewers were treated to more outrageous costumes than fancy dress day at Comicon.

Every blade and garment involved in the ceremony sits on a special cushion and has a name like “the trilby of entitlement” or “the spatula of hereditary legitimacy”.

But the Queen sadly, and understandably at 96, didn’t feel up to attending this festival of live-action roleplay herself. I, of course, wish Her Majesty well.

Eternal Leader Charles, Defender of the Union, in procession following the Greatsword of Imperial Regret
(

But Charles must have felt some small temptation to take his unprecedented stand-in routine and run with it.

Indeed, given his previous record of overstepping the line between politics and The Palace, it’s worth considering how close we might have been to a benevolent dictatorship.

“Mummy’s government will dissolve all functions of democracy in the United Kingdom,” we’re lucky he didn’t say.

“…and all power in the nation will be returned to its rightful holder – me. Mwahahahahahahaha!”

And given both major party leaders are basically spending all their time daring each other to resign, that might not have been entirely farfetched.

Previous : Sinister house of serial killer who asked for death penalty preserved with creepy dolls
Next : Queen’s Speech in full – how 38 Bills at State Opening of Parliament affect you