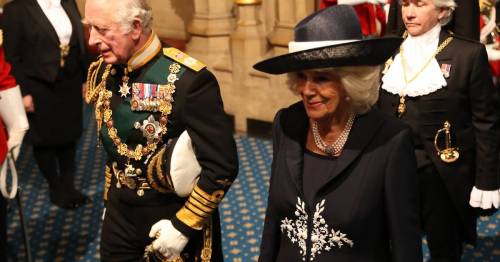 Unveiling the Queen's Speech, setting out the Government's policy agenda for this parliament, the Prime Minister will confirm no extra funds, or plans for a windfall tax on energy giants, to help hard-up households as prices rocket.

The Prime Minister, desperate to reset his premiership amid Partygate and heavy losses in the local elections, will set out fresh plans for "levelling up" and an infrastructure bank.

But the Tories' legislative agenda will spark fresh anger as the government ignores pleas to ditch laws that will criminalise protests and fails to deliver on promises to boost workers' rights.

The Queen's Speech, which will be read out in the Lords' by Prince Charles as the 96-year-old Queen will not attend the ceremony due to mobility issues., will contain 38 new bills in total.

As well as plans to "dynamise" the economy, measures include a British Bill of Rights which replace the Human Rights Act.

The Imperial State Crown is brought to the Houses of Parliament
(

New legislation governing the media will include the already-public and controversial plans to privatise Channel 4.

The Queen's Speech also includes seven measures scrapping EU regulation – covering areas from data reform to gene-editing to financial services – as ministers seek to capitalise on the benefits of Brexit.

Mr Johnson said it was part of a wider programme to get the country “back on track” after the pandemic while addressing the cost-of-living challenges.

“In spite of everything we have been through, we are going to ensure that over the two years we have left in this parliament, we spend every second uniting and levelling up this country, exactly as we said we would,” he said.

“We will get the country through the aftershocks of Covid, just as we got through Covid, with every ounce of ingenuity and compassion and hard work.”

Labour critics and possibly those on the Conservative backbenches too are bound to seize on the absence of any measures to immediately alleviate the pain of spiralling prices.

There is no windfall tax on the soaring profits of energy giants, which has been demanded by opposition parties and others campaigning to ease the cost-of-living crisis.

Instead, ministers highlighted a £22 billion package already announced while hinting at further support in the future.

But the PM is likely to rebuff calls for an emergency budget and in the foreword to the documents, will add: "But we must also remember that for every pound of taxpayer’s money we spend on reducing bills now, it is a pound we are not investing in bringing down bills and prices over the longer term."

Separately, a Schools Bill for England will crack down on truancy, beef up the powers of education watchdogs and reform the funding system.

A Levelling Up and Regeneration Bill is expected to give local leaders powers to rejuvenate high streets, by forcing landlords to rent out empty shop units.

And a draft mental health bill will overhaul of existing powers to protect patient liberty and prevent those with learning difficulties from being detained without their consent.

The Government is likely to face criticism for once again failing to outline plans to ban trophy hunting imports.