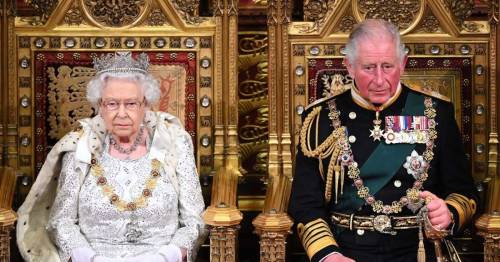 Queen’s Speech 2022: 7 things that could be announced – and what’s not included

Boris Johnson will lay out his plans for the next year in the Queen's Speech, which lists the laws the Government will try to get onto the statute book in the coming months.

The contents of the speech are written by ministers but it is read out by the monarch as part of the lavish State Opening of Parliament.

Buckingham Palace has announced that Prince Charles will step in as the 96-year-old Queen will not attend the ceremony after experiencing mobility issues.

The Queen's Speech offers the scandal-hit Prime Minister a chance to try to regain control of the agenda after the Partygate scandal and the Conservatives' poor performance at the local elections.

The cost of living crisis will loom over the event, with No 10 saying that it was "at the forefront of the PM's mind".

"You would certainly expect the work of the Government to be tailored towards that," his spokesman said.

Boris Johnson's leadership has been beset by a series of crises
(

But immediate help for hard-up Brits is not expected to come, with the speech focusing on longer term plans.

Here's what we know about what will be in the speech – and what won't be.

What's expected to be in the Queen's Speech?

New legislation will be brought forward to overhaul England's schools, with crackdowns on truancy and compulsory registers for home-schooling to track down the "ghost children" who fell through the cracks during the pandemic.

The bill will allow councils to establish their own academy trusts and ask their schools to join them by 2030.

Ofsted will be given stronger power to crack down on illegal schools and funding for schools will be reformed under the plans.

It is also expected to include plans for a 32.5-hour school week, boosted targets for Maths and English skills and a "parent pledge" to inform mums and dads if their children are falling behind.

Ministers will introduce a Higher Education Bill, which would create a Lifelong Loan Entitlement to help people pick up new skills.

The loan would be equivalent to four years of education – £37,000 in today’s fees – for use over their lifetime for a range of short and technical courses.

Culture Secretary Nadine Dorries triggered a backlash by vowing to privatise the public service broadcaster – in the biggest sale of a state-owned asset since Royal Mail in 2013.

She said Channel 4 held a "cherished place" in British life but it needed a change of ownership to flourish.

A new bill to underpin the move in law is expected in the Queen's Speech.

Levelling Up and Regeneration Bill

Landlords would be forced to rent out empty shop units and to allow councils to take control of derelict buildings through tougher compulsory purchase orders.

The Tories promised in their 2019 manifesto to "update" the Human Rights Act, which put the European Convention on Human Rights into domestic law.

Justice Secretary Dominic Raab has spoken about tearing up the legislation and replacing it with a British Bill of Rights.

He said the new bill would result in "less shifting of the goalposts, less elastic interpretations of human rights", adding that people find the current law "frustrating in the context of deporting foreign national offenders".

Boris Johnson boasted about a "super seven" set of Brexit bills to change laws the UK inherited from the EU – more than 16 months after Britain severed ties with Brussels.

He told the Sunday Express that a new Brexit Freedoms Bill will cut EU regulatory "red tape" while a Procurement Bill would help small and medium sized businesses compete for Government contracts.

Boris Johnson has threatened to use legislation to tear up his own Brexit deal, following ongoing problems with the trading rules for Northern Ireland.

The Government could bring forward a bill empowering it to override the Northern Ireland protocol – a key part of the Brexit agreement designed to prevent a hard border on the island of Ireland.

The protocol is hated by the unionist DUP party, who are insisting they won't form a power-sharing executive with nationalists Sinn Fein until issued are resolved.

Deputy PM Dominic Raab refused on Sunday to say whether new measures would be included.

Any changes to the protocol without agreement from Brussels would trigger a furious row.

What's not in the Queen's Speech?

The flagship legislation was due to boost workers rights, clamp down on insecure employment and ensure bosses hand over all tips to staff.

But it looks like the long-awaited bill – which was first mentioned in 2019 – won't be included in the Queen's Speech.

A major overhaul of planning rules was mooted last year but the idea was shelved after a backlash from Tory MPs.

Tweaks to planning law could be included in the Levelling Up Bill but there's no expectation of a major shake-up – especially after the Conservatives suffered losses in their southern heartlands at last week's local elections.

The Government appears to have quietly shelved plans to ban imports of foie gras and fur in an attempt to appease right-wingers.

It is unclear whether promises to crack down on puppy smuggling and trophy hunting will make it into the Queen's Speech.

Some bills will be carried over, which didn't get through Parliament in time to make it into law.

These includes the Higher Education (Freedom of Speech) Bill aimed at preventing curbs on free speech in universities and the long-awaited Online Safety Bill.

Previous : Queen’s Speech: Tories vowed 20 times to bring in Employment Bill but reforms set to be delayed
Next : Crews in Peguis First Nation ramp up flood protection in anticipation of more rain