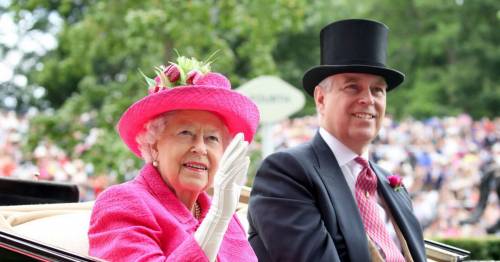 Prince Andrew is set for a court showdown after a judge ruled he should face a civil trial over allegations he sexually abused a 'teen sex slave'.

It comes following Virginia Giuffre's claims that the Duke of York abused her when she was trafficked by paedophile financier Jeffrey Epstein.

The royal, who is the Queen's second son, has vehemently denied the allegations.

It's long been thought that Andrew is Her Majesty favourite son, and she's said to have had a far more hands-on relationship with when he was a child than his older brother Prince Charles.

Royal expert Penny Junor once said: "I think the Queen has always had a bit of a blind spot when it comes to Prince Andrew."

But since giving a "car crash" interview on BBC Newsnight about his association with the Epstein, Andrew has seen his royal role diminish with his mother approving him stepping back from public life and reportedly cancelling a milestone birthday party…

Stepping down from public duties

In the days after the Newsnight interview was broadcast in 2019 Andrew sensationally quit public life "for the foreseeable future" in a statement – approved by the Queen.

He said it had "become clear" to him that "my former association with Jeffrey Epstein has become a major disruption to my family’s work."

Andrew has now stepped down from royal duties
(

He expressed sympathy for the victims of the convicted sex offender and disgraced financier, saying he "hoped they could rebuild their lives."

He said: "It has become clear to me over the last few days that the circumstances relating to my former association with Jeffrey Epstein has become a major disruption to my family’s work and the valuable work going on in the many organisations and charities that I am proud to support.

"Therefore, I have asked Her Majesty if I may step back from public duties for the foreseeable future, and she has given her permission.

"I continue to unequivocally regret my ill-judged association with Jeffrey Epstein.

"His suicide has left many unanswered questions, particularly for his victims, and I deeply sympathise with everyone who has been affected and wants some form of closure.

"I can only hope that, in time, they will be able to rebuild their lives. Of course, I am willing to help any appropriate law enforcement agency with their investigations, if required."

Just weeks after the interview, the Royal Family celebrated Christmas 2019 at Sandringham – and as is tradition greeted well-wishers as they walked to church for a service attended by the Queen.

But rather than attending this service at around 11am, Andrew attended a more low-key service, which takes place earlier in the morning – missing the crowds.

But it was reported that the Queen cancelled a birthday bash she had planned for him and downgraded it to a small family dinner.

The Queen hosted a lavish reception at Buckingham Palace to mark the Prince of Wales’ 60th birthday in November 2008.

But in the wake of allegations against him, a similar party for Andrew didn't happen.

Andrew with his parents at the Epsom Derby in 2016
(

It was not just on his 60th birthday that he faced a snub, last year, when he turned 61, the Queen also changed convention.

She usually uses the royal social media accounts to publicly wish her loved ones a happy birthday on their special day.

But she decided to change her message to her third oldest child Andrew last year.

She only shared the message on Twitter, not on Instagram, and she scrapped the use of his official title, the Duke of York.

It also wasn't actually a happy birthday message, but instead an On This Day style message.

It read: " #OnThisDay in 1960 The Queen was safely delivered of a son, the first child born to a reigning Monarch since 1857.

"Her Majesty is pictured holding Prince Andrew in 1961 on the balcony of Buckingham Palace, alongside The Duke of Edinburgh, Princess Anne and The Queen Mother."

As well as the Buckingham Palace photo, there was a photo of Andrew's official birth announcement.

No help with costs

Earlier this year, Virginia Giuffre began the process of suing Andrew in a civil case in New York for allegedly sexually assaulting her when she was a teenager.

She alleges she was told by Epstein and British socialite Ghislaine Maxwell to have sex with the Prince at Epstein's mansion in New York and at other locations.

The prince has always denied the allegations and said he has “no recollection” of ever meeting her.

And just last week it emerged that Andrew was trying to force through the sale of his £17million Swiss chalet, as the Queen will not pay his spiralling legal costs.

A source said: “It is crunch time for Andrew on several fronts.

“He is meeting all the costs himself so he needs to raise cash fast to pay bills which are increasing by the day.

“If there was the potential to settle, well, that is an option, but it is in no doubt that the Queen would not assist him in doing so.”

Senior royals including Prince Charles and Prince William were ­understood to be ­“absolutely furious” when they learned of suggestions that the monarch could be asked to settle Andrew’s bills.

A source said: “They are both of the opinion that Andrew can sort out his own mess.”

From next month, the Queen will be marking her Platinum Jubilee year of 70 years on the throne.

She is the first ever monarch to reach the landmark – and all royals are expected to play a part in celebrations, except Andrew.

A source told the Sun that Andrew will be pulled from all of the Platinum Jubilee celebrations.

The source added: “The plan is for him to be invisible during celebrations.

Meanwhile, speaking before today's announcement, Mirror royal editor Russell Myers said there would be “nervousness” in the Palace that Andrew’s trial could overshadow the Queen’s Platinum Jubilee celebrations.

He told the Pod Save the Queen podcast: "There’s obviously a lot of nervousness within Palace walls how this could potentially overshadow the celebration.

Previous : Star Hobson: Evil mum of murdered baby has sentence referred to Court of Appeal
Next : Saudi Arabia to auction up to three mining licences in 2022 -minister