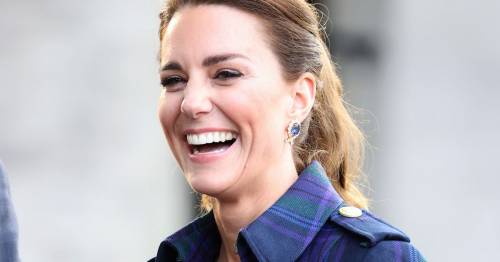 No glamorous look for the Duchess of Cambridge is complete without stunning diamonds, sapphire or pearls to make her outfit pop.

And fortunately for Kate, her close bond with the Queen has seen her be given the honour of being allowed to wear some gorgeous jewellery held in Her Majesty's collection.

But it's not just her bond with the Queen that has seen her have her pick of the jewels, Kate is also said to have struck up a friendship with Angela Kelly – Her Majesty's personal dresser, who oversees her jewellery collection.

A palace source told Katie: "Kate gets the pick of the jewels for big occasions and the Queen is happy to open up her jewellery box.

“Kate has been clever to befriend Angela Kelly, who is in charge of the Queen’s personal jewellery collection and oversees the loans.

“Generally, Kate is allowed to borrow whatever she fancies.”

So what beautiful pieces has Kate borrowed from the Queen? Here we take a look…

Kate in one of her stunning birthday photos
(

In this portrait, Kate wears earrings belonging to the Queen
(

One of the most recent pieces Kate has borrowed from the Queen is a pair of diamond earrings.

She wore them for one of her official 40th birthday portraits, in which she teams them with a vibrant red dress.

Photographer Paolo Roversi, the man behind the portraits, said he wanted Kate to look natural with just simple earrings.

Another recent loan Kate had the honour of making from the Queen was a beautiful pair of sapphire and diamond fringe Art Deco-style earrings.

The jewellery originally belonged to the Queen Mother, who wore them in public on several occasions, and the earrings passed to the Queen upon her death in 2002.

Kate wore them with pride as she hosted a carol concert called Together at Christmas at Westminster Abbey last month.

Kate on her wedding day wearing the Cartier halo tiara
(

One of the first pieces of jewellery from the Queen that Kate had the honour of wearing is the tiara she donned on her wedding day.

The tiara was given to the Queen, then Princess Elizabeth, by her mother on her 18th birthday.

Kate used the loan of the tiara, a tradition at royal weddings, to signify the time-honoured custom of wearing "something borrowed" on her wedding day.

The Queen wears the same necklace
(

This show-stopping necklace was inherited by the Queen Mother and gifted to the Queen as a wedding present from her parents in 1947.

It's long-style is thought to have made it difficult for the Queen to wear and it only got rare outings.

However, in 2017, Kate wore it to a banquet during a state visit to the UK by the King and Queen of Spain – and she dazzled in it.

So much so, that in April 2018, Her Majesty sported it as she attended a Commonwealth dinner.

Kate wears a pair of the Queen's sapphire earrings
(

She wore them during an engagement in Edinburgh
(

Many of the jewels in the Queen's collection have been gifts she's received on her travels.

And one spectacular gift she was presented with on a tour of the Middle East in 1979 was the Dubai Looped Sapphire Demi-Parure consisting of sapphire and diamond earrings, necklace and bracelet.

And just last May, Kate was given the honour of wearing the set's eye-catching earrings.

She teamed them with a stunning tartan coat she wore to a screening of the movie Cruella at the Palace of Holyroodhouse in Edinburgh.

Meanwhile, one of the most eye-popping and expensive pieces Kate has ever loaned from the Queen is the Nizam of Hyderabad necklace.

The Nizam of Hyderabad gave the Queen the necklace, thought to now be worth £60million, along with a tiara as a wedding gift.

Although the tiara was dismantled, the necklace remains intact with the Queen wearing it in several official portraits.

Kate had the honour of wearing it in 2014 for the National Portrait Gallery's annual gala.