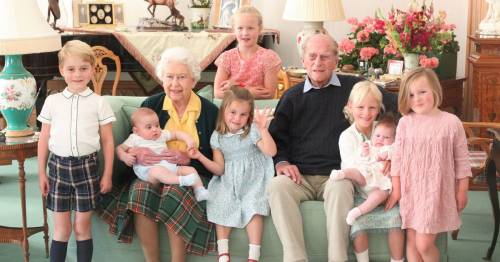 The Queen's great-grandchildren are reportedly set to have starring roles at an event to celebrate her Platinum Jubilee.

It is said that 10 of her 12 great-grandkids are set to take part in a special event at the Royal Windsor Horse Show, which begins on Thursday.

Each night at the four-day show will be a performance of 'Gallop Through History' that will bring together 500 horses and over 1,000 performers to tell the story of the monarchy from the time of Elizabeth I.

On the last night, Sunday, May 15, there will be a special gala performance that will include the likes of Dame Helen Mirren and Stephen Fry – and it will be broadcast live on ITV.

And according to the Sunday Times, this performance will also see the young royals riding in a carriage.

Among them will reportedly be the three children of Prince William and Kate – Prince George, Princess Charlotte and Prince Louis.

Joining them will be the Queen's eldest great-grandchildren Savannah Phillips, 11, and Isla Phillips, 10 – the daughters of Peter Phillips.

The video appears to have been taken at Windsor Castle
(

Love the royals? Sign up for the Mirror's daily newsletter to get all the latest news on the Queen, Charles, Kate, Wills, Meghan, Harry and the rest of The Firm. Click here to sign up . .

It's not known if Prince Harry and Meghan Markle's children Archie and Lilibet will take part.

The report comes after footage emerged on social media several weeks ago showing the little ones playing in a carriage in the grounds of Windsor Castle.

Lady Louise Windsor has taken up the sport of carriage driving
(

In the video, it's difficult to make out exactly which of the Queen's 12 great-grandchildren are on the carriage but George, Charlotte and Louis all appear to be there.

Standing to the right of the carriage appears to be their mum the Duchess of Cambridge, while Eugenie holds on to her young son August's hands as he toddles around on the grass.

Beatrice's husband Edoardo Mapelli Mozzi also appears to be taking photos of the carriage, while a dog can also be seen running underneath the carriage.

Meanwhile, it has also been reported that the Queen's "favourite" grandchild will honour Prince Philip with a touching tribute at the same show.

Lady Louise Windsor, 18, is said to be preparing to drive the late Duke of Edinburgh’s carriage at the horse show celebrations.

The gesture will be particularly poignant because Philip, who passed away on April 9, 2021, took up carriage driving in the 1970s and taught the sport to his granddaughter.

Previous : Girl, 12, was ‘dancing with mates’ before being killed ‘by boy filming her on Snapchat’
Next : Sick undertaker invited man to mortuary for sex with corpse and shared photos online