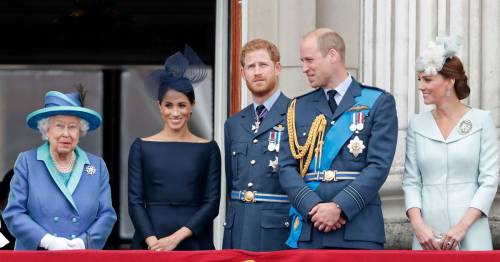 The Queen followed the same model of separation to remove Prince Andrew from royal life as she used when Meghan Markle and Prince Harry quit The Firm, it has been claimed.

Palace sources claim Her Majesty reportedly used similar tactics to protect the royal family in a bid to "insulate the institution from being hit by all the shrapnel that is flying around."

Prince Andrew was yesterday stripped of his royal titles in a bombshell announcement from the Palace after a 90-minute meeting with his mother.

It followed an announcement that a US civil action over sexual assault allegations – which he has consistently denied – can continue.

All of Prince Andrew's roles have been immediately returned to his mother, the Queen
(

A palace source told the paper: "They have taken this decision to insulate the institution from being hit by all the shrapnel that is flying around,' they added.

"It follows the same model as the Sussex separation. The removal of titles and patronages means the institution can now legitimately say it is not involved.

"'It was a ruthless and swift decision which will have been recommended by the Prince of Wales and the Duke of Cambridge and sanctioned by the Queen."

Like Harry and Meghan, Andrew retains his title HRH but will not use it in any official capacity.

According to the Mail, the decision to strip her so-called favourite son would have 'pained' the Monarch, but she knew she needed to act for the sake of the monarchy – as she did with Harry & Meghan.

Harry and Meghan announced they were quitting the Royal Family in a bombshell announcement in 2020.

The couple moved to the US, where they live with their children Archie and Lilibet.

"She has the ability when push comes to shove, to know what is best for the institution and will act in her role as head of state, not a mother," another source told the Mail.

"She loves Andrew and this doesn't mean he is no longer her son. But a decision had to be made as it was overshadowing everything the family did and her forthcoming platinum jubilee.

"Everyone will be feeling very relieved he has finally been cut adrift. It may even help him to have more clarity in fighting the case."